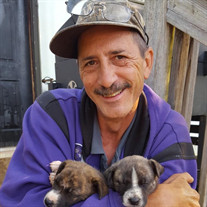 John Alrich Price, 62, of Stevensville, MD, passed away on June 2, 2021. He was born on December 7, 1958, to Tobin and Louise Price. Fisherman, hunter, gardener, Eagle Scout, and all around hellraiser, John loved the outdoors and his family and friends. He taught his two daughters how to cook great food, grow a tomato that people will drive across the Bridge for, fish well enough to win a tournament, and curse like a sailor (followed by an apology, of course). He had a heart bigger than a soul could bear and was a fighter every day. In fact, John received his blackbelt in karate as a teenager, and though he could have kicked most peoples’ butts, he knew when to walk away. He enjoyed telling his family that his hands were registered weapons in Delaware (though we never actually verified this). John loved music, acting as lead singer, songwriter, and playing guitar and tambourine in local bands Traffic Jam, Whitewater, and others. He even had a stint as a DJ known as “Johnny Good Times,” bringing his love of fun, good company, and a little bit of chaos wherever he went. Not a fan of sitting down for very long, John loved to build things, fix things, mess with other things that were perfectly fine, and annoy his family with his inability to sit down to dinner. A former electrician, he enjoyed pointing out to anyone who would listen what buildings he wired around town or the big water tower that he climbed to fix the bulb. John was retired at the time of his passing after working about 30 years at the Washington Suburban Sanitary Commission. He is preceded in death by his beloved mother, Helen Louise Price, and his father, Tobin Everett Price, Sr. He is survived by his wife, Jennifer Anne Birdsall, and his two daughters, Emily Gayle Price and Patricia Claire Price. He will be greatly missed, and may he rest in peace.

John Alrich Price, 62, of Stevensville, MD, passed away on June 2, 2021. He was born on December 7, 1958, to Tobin and Louise Price. Fisherman, hunter, gardener, Eagle Scout, and all around hellraiser, John loved the outdoors and his family... View Obituary & Service Information

The family of John Alrich Price created this Life Tributes page to make it easy to share your memories.

John Alrich Price, 62, of Stevensville, MD, passed away on June...

Send flowers to the Price family.