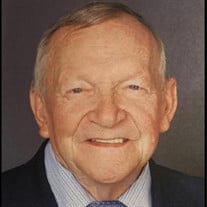 John Wayne Kennedy, 82, of Kent Island, Maryland, passed away on Tuesday, October 12th in the company of family. He was predeceased by his wife, Barbara Kennedy; his mother and father - Nellie and Vernon Kennedy; and his brother Danny Kennedy. John is survived by his six children, Katherine Wenk, Christina Doyon, Michael Kennedy, Sharon Kennedy, Mark Kennedy and Thomas Kennedy; his sisters Joyce Kennedy, and Joan Lamble, and brother Patrick Kennedy; as well as his 13 grandchildren and five greatgrandchildren. Some of John’s greatest friends were Wayne Kozda, Jan Pazokski, Jasen Petersen, Bill Schroeder, Ron Kaiser, Carl Grant, and Richard Godwin. Born on a dairy farm in Schofield, Wisconsin, John was an avid outdoorsman who had a deep love for Christ, helping others, chemistry, traveling, scuba diving, and the Greenbay Packers. He spent much of his time in nature here in the states, around the world, and at his home on Kent Island. John graduated from D.C. Everest Senior Highschool. Before attending university, John became an Eagle Scout and his love for the military only grew when he joined the Wisconsin National Guard as a tank driver at 17 years old. Later on he would serve in the U.S. Army before being honorably discharged in July 1962. John double-majored in Science at the University of Wisconsin at Madison. From there he went on to graduate school at New York University and went on to become a federal inspector in New York and Chicago. He worked in Washington, DC as an assistant staff officer to assist in implementing new technologies. One of John’s many hobbies was scuba diving. He dove to deep wrecks in the Atlantic and Pacific Oceans. From diving at night with huge manta rays in Hawaii, to the Great Barrier Reef in Australia - he explored it all. He was also a scuba diving instructor for 35+ years as well as a life member of the Laurel Rescue Squad where his children grew up. Growing up on a farm, John had a strong curiosity of everything around him which led him to Australia to research a plant combination that would potentially cure certain types of cancer. He and his team found success with this treatment and its ability to save lives. Another of his accomplishments included discovering a pyramid underwater in Rock Lake, Wisconsin. He also authored an adventure fiction novel after a trip to Central and South America titled, “To Slay A Demon”. John never met a stranger and was a beloved regular and local celebrity at Kentmorr, the Jetty, The American Legion, and Elks Lodge on Kent Island. Those that knew him described him as warm, funny, and extremely intelligent. Christianity had always been important to John. He had a strong love for God and credited Him for his wonderful family and many blessings. More recently he had been working on cancer cell research with NASA via his own business Zero Gravity Solutions sending experiments on four NASA and 10 SpaceX launches. He was recently featured in Millennium magazine’s 2019 ‘Who’s Who’ for his scientific discoveries with his own company, John W Kennedy Consultants - a firm dedicated to representing companies and associations in the clearance of pesticides. His life was spent trying to save our planet and to make the world a better place. He wanted to be remembered as a hard-working, honest, and conscientious man who loved the Lord and followed His rules and instructions. Photos and memories of John may be emailed to [email protected] An Irish style wake will be held later next year. Please send your contact information to this email to receive notification. The family asks that donations be made in memory of John Wayne Kennedy to the Chesapeake Bay Foundation (www.cbf.org/).

John Wayne Kennedy, 82, of Kent Island, Maryland, passed away on Tuesday, October 12th in the company of family. He was predeceased by his wife, Barbara Kennedy; his mother and father - Nellie and Vernon Kennedy; and his brother Danny Kennedy.... View Obituary & Service Information

The family of John Wayne Kennedy created this Life Tributes page to make it easy to share your memories.

Send flowers to the Kennedy family.