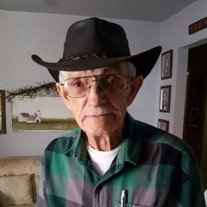 John “Jack” Thomas Edwards of Chestertown, MD passed away at his home on Saturday, July 10, 2021. He was 88. Jack was born Nov. 24, 1932 in Massey, MD the son of the late Thomas W. Edwards and Adlean “LeSage” Edwards. He started his service in the National Guard and continued his service in the United States Army during the Korean Conflict. Soon after his discharge in 1956 he married his wife of 64 years, Jean Mary Edwards. Jack worked as an aircraft electrician for the Dept. of Defense at Dover Airforce Base and retired in 1987 after 30 years of service. After retirement he worked for Dixon Valve and Atlantic Tractor as well as volunteered his time delivering for Meals on Wheels. Jack was a past commander of American Legion Post 36 and a member of VFW Post 652 in Millington. He enjoyed camping in PA and working around the house and in the yard. In addition to his parents he was preceded in death by one son, Dennis J. Edwards (Missy) He is survived by his wife Jean Mary Edwards of Chestertown, MD, two daughters, Vicki Lynn Suter (Dennie) of Millington, MD, Lisa K. Ryan (Kenny) of Millington, MD, five grandchildren, ten great grandchildren, one great, great grandchild, daughter in law, Lisa Edwards of Milford, DE. A visitation will be held Monday, July 19, 2021 from 10a – 12pm at Fellows Family Funeral Home 370 Cypress St. Millington, MD. A Time of Sharing will begin at 12pm. In lieu of flowers contributions can be sent to Compass Regional Hospice 160 Cousevall Dr. Centreville, MD 21617.

The family of John "Jack" Thomas Edwards created this Life Tributes page to make it easy to share your memories.

John “Jack” Thomas Edwards of Chestertown, MD passed away at...

Send flowers to the Edwards family.