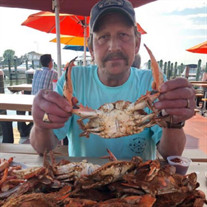 John Francis Downey, 71, of Grasonville, Maryland, passed away on November 17, 2021, at The Anne Arundel Medical Center. John bravely fought for his life after a severe allergic reaction and eventually succumbed to the effects of septic shock. He was surrounded by loved ones at the time of his passing. John was a lovingly devoted husband for more than 44 years. John was born on November 19, 1949 to William and Mable Downey in The District of Columbia and was the oldest of seven siblings. He grew up in Lanham, MD where he attended Duval High School and graduated in 1968 and joined the Navy shortly thereafter. He spent much of his youth enjoying time with his many friends and working on his beloved 1949 Panhead Harley Davidson. John spent the majority of his career at the various iterations of the Capital One Arena in Washington, DC, where he was loved by many and considered many of his co-workers to be family. John was a devout family man and enjoyed all the experiences that accompanied raising three boys and their five grandchildren over the years. John was an avid fisherman and had the good fortune to share his passion with his brothers, sons, and grandchildren. He also enjoyed the peace and displays of wonder offered by nature during his many walks, playing guitar, and taking his family out for a good meal. He also found great joy in collecting stamps, eating crabs with family, and watching his beloved Gunsmoke. Above all things, John was charitable in his outpouring of love for all people and his outward generosity to make sure others were cared for and felt included. John will be greatly missed by many. John is survived by his loving wife Faye; son Christopher and his wife Stephanie with their children Simon, Claire, and Madison; son Michael and his wife Sarah with children Hudson and Owen; brothers Billy, Mickey, Bobby, Tommy, and Patrick. He was predeceased by his parents William and Mable; brother Ricky; son Richard. A visitation will be held on Tuesday November 23, 2021, at the Immanuel United Methodist Church 102 School Lane Grasonville, MD from 6PM to 8PM. A private family service will be held on Wednesday November 24, 2021, at the church with burial following in Stevensville Cemetery in Stevensville, MD. A celebration of John’s life will be announced at a later date. Contributions in Memory can be made to the Immanuel United Methodist Church, 102 School Lane, Grasonville, MD 21638.

John Francis Downey, 71, of Grasonville, Maryland, passed away on November 17, 2021, at The Anne Arundel Medical Center. John bravely fought for his life after a severe allergic reaction and eventually succumbed to the effects of septic shock.... View Obituary & Service Information

The family of John F. Downey created this Life Tributes page to make it easy to share your memories.

Send flowers to the Downey family.