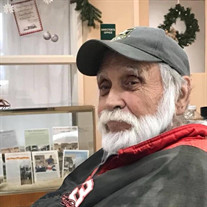 John Kimbles Crossley of Barclay, MD passed away at his home on Thursday, Feb. 17, 2022. He was 71. Born April 4, 1950 in Chestertown, MD the son of the late John E. Crossley and Frances “Kimbles” Crossley. John was a 1968 graduate of Queen Anne’s County High School. After graduation he enlisted in the United States Army and served in Vietnam. After an honorable discharge he returned home. John worked for the Kent County Detention Center as a Correctional Officer retiring in 2017. He enjoyed supporting his grandchildren by attending their sporting events and musical performances. In his free time, he also enjoyed spending time at the senior center and maintaining his vegetable garden. John was an avid NASCAR and Dale Earnhardt fan. He is survived by his wife of 48 years, Sammie Crossley of Barclay, MD, two sons, Mark Crossley (Kim) of Camden, DE, Justin Crossley (Jenny) of Barclay, MD, five grandchildren, Madison, Trent, Gabriel, Autumn and Daniel, and one sister, Maureen Wheatley of Smyrna, DE. A visitation will be held on Sunday, Feb. 27, 2022 from 9-10am at Fellows Family Funeral Home at 370 Cypress St. Millington, MD. A Celebration of Life will begin at 10am. In lieu of flowers, contributions can be sent to the Wounded Warrior Project online at: support.woundedwarriorproject.org Online condolences can be sent to the family at www.fhnfuneralhome.com

The family of John Kimbles Crossley created this Life Tributes page to make it easy to share your memories.

John Kimbles Crossley of Barclay, MD passed away at his home...

Send flowers to the Crossley family.