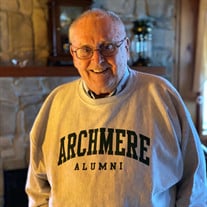 John “Jack” Carpenter Burr of Chestertown, recently of Hances Point, North East, Maryland, peacefully passed away on Friday, March 25, surrounded by his wife and three children. He was 92 years old. Jack was born in Philadelphia and raised in Wilmington. He graduated from Archmere Academy in 1948. Jack proudly served in the Army for two years during the Korean War. The Chesapeake Bay was Jack’s playground. He thrived on the water. In his youth, Jack spent summers at Camp Tockwogh in Still Pond, Maryland. He was among the first campers to attend what became his beloved waterfront haven. Later, Jack was invited to join the Board of Directors, and served as a trustee for several years. His affection for Camp Tockwogh was passed on to succeeding generations as many of his children and grandchildren were also campers. In 1956, Jack married Judy Hunsicker. Their family grew quickly and life with four children was one adventure after the next. Jack loved to fly and often recalled one thrilling flight as a young pilot maneuvering his Cessna in between the piers and piles of the Delaware Memorial Bridge. Every summer, the Burr kids would pile into the station wagon and make the trek to Hances Point, affectionately known as “Camp Burr.” As the children grew older, Jack and Judy continued their love of traveling and sailing, and together they explored the waters of the Chesapeake, Florida Coast, Caribbean Islands, Bermuda, West Coast, and even Panama. Before Jack retired on the North East River, he was owner of Delaware Insulation Company. Jack and Judy enjoyed their later years together watching their four children, four grandchildren, and six great-grandchildren swim and splash in the high tides at Camp Burr. Jack taught all the Burr kids and grandchildren how to swim, sail, and waterski. Affectionately known as “Pop Pop,” he was always up early and willing to take the grandkids and their friends tubing. Jack stayed active playing golf and tennis. For decades, he beheld breathtaking sunsets from his bench on the dock. His love for the river will forever be his legacy. He is preceded in death by his son, John C. Burr Jr., parents, Augustus W. Burr and Elizabeth C. Burr, sister, Mary Stevens, and brother, Frank Carpenter Burr, who was lost in WWII. Jack is survived by his wife, Judith H. (Mabel), his son, William A. Burr (Wilbur) of Ft Lauderdale, Florida, daughters, Elizabeth Keefe and Barbara Leonard of Chestertown, Maryland, four grandchildren: Patrick McMullen, Allison Burr Hicks, Jacqueline Jablecki, and Emily Armstrong, and six great-grandchildren: Jackson McMullen, Liam McMullen, Lucy McMullen, Charlotte Burr Jablecki, Holden Burr Hicks, and Theodore Francis Hicks. Services will be held on Friday, April 22,2022 at 11:00 AM at St. Mary Anne's Episcopal Church 315 South Main St. North East, MD 21901 with interment with military honors to follow in the churchyard. In lieu of flowers contributions may be made to Camp Tockwogh 24370 Still Pond Neck Road Worton, MD 21678. www.fhnfuneralhome.com

The family of John Carpenter Burr created this Life Tributes page to make it easy to share your memories.

Send flowers to the Burr family.