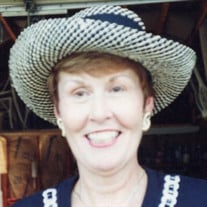 Joan Russ Taylor, 79, of Easton, MD died peacefully at her daughter’s home, May 8, 2022, after a long battle with lung cancer. She was born March 30, 1943, to Clarence Henry Russ and Sylvia Rosalie Spence Russ. Joan graduated from Easton High School in 1961. Following graduation, she began her career with Bell Atlantic and later Verizon until her retirement in 1984. In 1969 she gave birth to her daughter Kimberly and from that moment, the two were inseparable. Always together, they were two peas in a pod. In February 1998, Kim gave birth to twins, Kadey and Grayson Pfister making Joan a devoted, doting Grandma. They were her world, and she treasured every moment with them. Joan loved to entertain, finding any reason to host a cocktail or dinner party. She loved to be surrounded by friends and family. Joan is survived by her husband of 40 years, Clinton D. Taylor, her daughter Kim and husband Paul Smith, grandchildren Kadey and Grayson, as well as Clinton’s sons Neil and Scott Taylor. A gathering will be held to remember Joan at Fellows, Helfenbein, and Newnam Funeral Home, 200 S. Harrison Street, Easton, on Wednesday, May 18, 2022 from 5-7 PM. Donations may be made in Joan’s name to Talbot Hospice, 586 Cynwood Drive, Easton, MD 21601.

The family of Joan Taylor created this Life Tributes page to make it easy to share your memories.

Send flowers to the Taylor family.