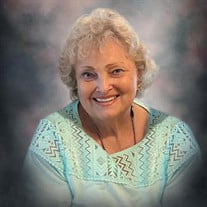 Joan Patricia (nee Smith) Gaultney March 18, 1938 – December 27, 2021 (age 83) Joan Patricia Gaultney went to her heavenly home on December 27, 2021. Joan was a faithful woman who loved the Lord, her family and her church community. She was the beloved wife of the late Glenn Gaultney, who she was married to for 51 wonderful years. Joan is survived by her son’s Roger Gaultney (Mary Jo), Daryl Gaultney (Margaret), James Farina (Vanessa), her grandchildren Melody McConney (Patrick), Tricia Rupert (Dave), Ryan Gaultney (Annee), Sarah Carver (JimBob), her great grandchildren Madison, Caroline, Owen, Mackenzie, Nora, Perri and Rebel. She is also survived by her siblings Wayne Smith, Clyde Smith (Joyce), Darlene Bosley (Donald), Stanley Smith (Gretchen) and her many nieces and nephews. Joan was born on March 18, 1938, in Baltimore, MD to the late Ray Smith and Hilda Howes Smith. She lived her childhood in Glen Burnie, MD where she developed what turned out to be a lifelong friendship with the women she referred to as “The Old Girls Gang” during their Elementary school years. She cherished these friendships for the longevity of her life. During her teen years she met the love of her life Glenn Gaultney. They were married and began a wonderful life together running their business and raising their two son’s Roger and Daryl. They eventually moved to the Eastern Shore where they opened Faith Building Supplies. Joan served as the secretary of what became a faith filled business that allowed them to not only earn a living but meet many wonderful people that became lifelong friends. Joan had a compassion and love for children which led her to her work at the Easton Memorial Hospital Day Care Center and the church nurseries for many years. Joan was a woman that anyone who came in contact with her was welcomed with open arms. She was someone who you could celebrate with or offered you a shoulder to cry on and also was a counselor, where she would share her experiences to help you along the way. She never turned anyone down and would make sure you knew you were loved when you were done talking to her. Her door was always open, and you would think she was running a call center with the amount of time she spent on the phone each day. During her life she was most proud of her marriage to Glenn, her children, grandchildren and great grandchildren. She loved them all with her whole heart and never passed up and opportunity to share that with others. To be loved by her was a love like no other. She was one of a kind and will be greatly missed by all who knew her or came in contact with her. Knowing her was a true gift from God and our memories of her will always bring a smile knowing you were part of her life. A Celebration of Life will be held at the Easton Church of God on Wednesday January 5th, 2022, at 12:00 pm. The family will receive friends at the church from 10:00 am until the time of the service. Burial will be held at Woodlawn Memorial Park in Easton, MD. Memorial donations may be made in her memory to St. Jude’s Children’s Research Hospital at 501 St. Jude Place Memphis, TN 38105.

The family of Joan Patricia Gaultney created this Life Tributes page to make it easy to share your memories.

Send flowers to the Gaultney family.