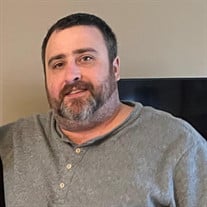 Chester, MD – Jesse William Revnell passed away on Saturday the 3rd of October 2021, at the home of his mother. He was 41 years young. Jesse attended the Naval Academy Primary School in his youth and later attended Queen Anne County schools. He moved to Maryland when he was four years old, coming with his parents from their hometown of Portsmouth, VA. Growing up Jesse loved playing Ice Hockey, riding dirt bikes, go carts, deer hunting, Motor-cross racing, hanging out with his friends, many cousins and extended family. At one time he had earned a CDL-B license through taking a college course and drove for various Tow companies. He also loved boating, working on cars and especially loved Ford vehicles. He was a very kind and loving person. He was a former business owner of a Boat and Car Detailing Company. He also loved to cook. Jesse’s greatest joys were helping to raise two fine boys, his stepson Dylan whom he was very proud of and loved unconditionally and is now in college. Jesse became a father to his only son, Lucas William in 2010 and thrived on fatherhood and taking care of the little guy. They shared a perfect love and enjoyed spending time together and joking around. Jesse had a special bond with his closest cousins Chris and Jeff and they are going to miss him terribly. Jesse was predeceased by his maternal and paternal grandparents. He is survived by and left to “cherish his memories” are his devoted mother, Teresa Boyd Rutter of Chester, MD, his father C. John Revnell, son Lucas W. Revnell, stepson Dylan J. Lindner and their mother, Lori A. LaGrossa all local to the area. Additionally, he is survived by his aunt Patricia Boyd Quidgeon and uncle Charles W. Quidgeon; special cousins Chris, Jeff, Ethan and Riley Quidgeon of Gales Ferry, CT along with a multitude of loving family members spread throughout the U. S. A. Jesse was loved by many and will be truly missed forever. A visitation and remembrance will be held at Helfenbein’s Funeral Home, 106 Shamrock Road, Chester, MD 21619, from 2:00 to 4:00 pm on Saturday, October 9th. Interment will be held at a later date at the family’s plot at Greenlawn Memorial Gardens, Chesapeake, VA. In lieu of flowers, memorial contributions can be made to a charity of your choice.

Chester, MD &#8211; Jesse William Revnell passed away on Saturday the 3rd of October 2021, at the home of his mother. He was 41 years young. Jesse attended the Naval Academy Primary School in his youth and later attended Queen Anne County schools.... View Obituary & Service Information

The family of Jesse William Revnell created this Life Tributes page to make it easy to share your memories.

Chester, MD – Jesse William Revnell passed away on Saturday the...

Send flowers to the Revnell family.