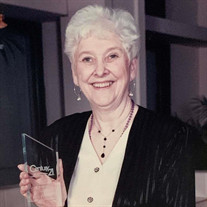 Janet Mae Trimble passed away peacefully on November 25th, 2021. She was 87 years old. Janet was born on July 11th, 1934 in Sabillasville, MD to the late Paul C. Fry and the late Helen Fry. Janet attended Thurmont High School and would go on to receive her nursing certification. In her youth, she worked at Bollinger Restaurant in Thurmont, MD for many years and would later relocate to the eastern shore of Maryland where she began her real estate career. Throughout her life Janet was married to Gene Althoff of Thurmont, MD, Robert “Bob” Trimble of Monrovia, MD and Lester Barton of Chester, MD. Janet was a talented, highly respected, and successful real estate agent for Rosendale Realty on Kent Island. During her real estate career, Jan received numerous accolades such as the Million Dollar Club and Lifetime Achievement award. She also held and served in several leadership positions for the Queen Anne’s County Board of Realtors. Janet was a member and active contributor to the Chesapeake Women’s Network, Red Hat Club, American Legion, Moose Lodge, and the Kent Island Yacht Club. As a devoted Christian she was a member of St. Luke’s and Wye Parrish. Janet was an avid traveler and enjoyed taking trips with family and friends to her favorite destination, Bermuda. She appreciated the beautiful landscape and views of her home on the water. Along with her parents, she is predeceased in death by her late husband’s Gene Althoff, Bob Trimble, and Lester Barton, in addition to her brothers Wayne and Morris Fry, and her son, Eugene David Althoff. She is survived by her brother, Ray Fry, daughters, Sharyn Gilliam and son-in-law Gary Gilliam, and Bobbie Thibault, son-in-law Scott Thibault, daughter-in law, Rebecca Althoff. She is also survived by grandchildren Shawn Gilliam, Lauren Edmonston and husband AJ Edmonston, Matthew Althoff, Mitchell Althoff and wife Kelsey Althoff, Kara Althoff, Evan Thibault, and great-grandchildren, Callen and Claire Edmonston. She is also survived by numerous cousins, nieces, and nephews. Visitations for Janet Mae Trimble will be held on Thursday, December 2nd from 2:00 pm to 4:00 pm and from 6:00 pm to 8:00 pm at Fellows, Helfenbein & Newnam Funeral Home: 106 Shamrock Road Chester, MD 21619. A funeral service will be held on Friday, December 3rd at 11:00 at St. Luke’s Chapel: 7208 Main St Queenstown, MD 21658, followed by a burial in Kingsley Cemetery. The family requests for the burial to be private for family only. In lieu of flowers, contributions can be made to St. Luke’s Chapel (Queenstown) or Old Wye Church (Wye Mills)

The family of Janet Mae Trimble created this Life Tributes page to make it easy to share your memories.

Send flowers to the Trimble family.