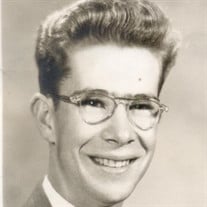 James Elliott Schweppe, Sr. passed away on April 9, 2021 at the University of Maryland Shore Medical Center in Easton, Maryland. He was 92 years old. He was born in Wilkinsburg, Pennsylvania on January 24, 1929, the youngest son of the late Lindsay E. Schweppe and Emma Jane Elliott Schweppe. Jim grew up in Verona, near Pittsburgh. He graduated from Clarion University in Pennsylvania, Class of 1951 with a bachelors degree. Following college graduation, Jim served honorably in the United States Army during the Korean War. On June 23, 1954 James married Patricia Ann Skinner of Corry, Pennsylvania. Jim was employed as a systems analyst in finance for Pittsburgh Plate & Glass, a systems manager at Johnson & Johnson Devro Division, and later as a financial systems consultant. Jim previously lived in Flemington, New Jersey for over thirty years and then resided in Dover, Delaware for ten years before moving to Easton, Maryland in June of 2020 with his son, Jim Jr. and daughter-in-law, Robin. He was a member of the Wyoming United Methodist Church in Delaware and formerly a member and ordained Elder of the Flemington Presbyterian Church in New Jersey. Jim is survived by his sons; James (Jim) E. Schweppe, Jr. and wife Robin of Easton, Maryland and Scott C. Schweppe and wife Susan of New Haven, Vermont and grandchildren; Jennifer, Lauren and Sarah. In addition to his parents, Jim was preceded in death by his wife Patricia, who died December 23, 2020 and his brother Robert L. Schweppe and his wife Miriam. A memorial service will be held on Friday, May 14, 2021 at 10 AM at Fellows, Helfenbein & Newnam Funeral Home, P.A., 200 S. Harrison St., Easton, Maryland. Interment will be held later that day at 2 PM at the Veteran’s Memorial Cemetery in Millsboro, Delaware.

James Elliott Schweppe, Sr. passed away on April 9, 2021 at the University of Maryland Shore Medical Center in Easton, Maryland. He was 92 years old. He was born in Wilkinsburg, Pennsylvania on January 24, 1929, the youngest son of the late... View Obituary & Service Information

The family of Mr. James Elliott Schweppe Sr. created this Life Tributes page to make it easy to share your memories.

Send flowers to the Schweppe family.