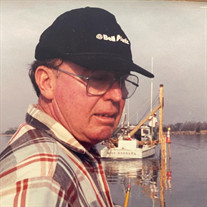 James Elmer “Jimmy” Outten passed away February 14, 2022, peacefully at home in the presence of his loving wife Sammy. Jimmy was born on August 3, 1932, at Easton Memorial Hospital, and graduated from Easton High School, class of 1949. He married his high school sweetheart, Clara "Sammy" Saulsbury, in 1954, and they raised three sons together. A third-generation farmer, Jimmy began working in the fields with his father and brother at a young age. Along with crop farming the family also raised livestock, such as cattle, sheep, hogs, and chickens so there was always plenty of work to go around. When he was young his father taught him how to box, setting up a boxing ring in the yard. Jimmy was very fast and powerful with his hands. In the 1980's, Jimmy bought a racehorse and began competing in harness racing. After some trial and error, and support from his loving wife, Sammy, he found himself on the winning side of things. Jimmy was a hard worker and a dedicated family man, devoted to maintaining the estate in Trappe where they lived. Jimmy was incredibly social and enjoyed playing cards with friends and telling jokes. His dancing skills came from Sammy, who taught him how to dance when they were teenagers. A lover of good food there weren't too many meals that he missed, particularly seafood, Jimmy would wait excitedly for oysters to be in season each year. He also found great joy in fishing, hunting, crabbing, and growing his own garden. He was most proud of his tomatoes and his peach trees and treasured freezing the peaches to eat later. Our lives were touched having known him and all those wonderful memories will remain in our hearts for years to come. Jimmy is survived by his wife, Clara "Sammy" Outten; his sons, Mark (Leslie) Outten, William "Brent" (Sandy) Outten, and Douglas Outten (Joyce); his granddaughter, Megan Outten (Matt); his grandson, Jakob Outten; and his sister, Alice Swann, Lee "Beaver" Carmine. Jimmy was preceded in death by his grandson James "Tyler" Outten; his father, Benjamin "Benny" Outten; his mother, Mary Moore Outten; his sister, Mary Hayman; and his brother, Frank Outten, Sr. The family will follow Jimy's wishes to forgo a Memorial Service, you may send donations in his memory to The Trappe United Methodist Church, 29421 Maple Ave., Trappe, MD 21673.

The family of James Elmer Outten created this Life Tributes page to make it easy to share your memories.

Send flowers to the Outten family.