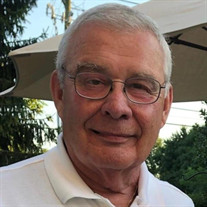 James Alan Kijowski, 74, of Easton, Maryland, passed away on January 31, 2022, surrounded by his family and loved ones. James was born on April 3, 1947, to Michael and Violet (Borawski) Kijowski in Warren, OH. He graduated in 1965 from McDonald High School, where he was a member of the National Honor Society and an All-Conference, All-District, 4-year Letterman on the football team. He earned a scholarship to attend Denison University, where he was a 4-year starter and team captain on the Big Red football team and named to the All-Ohio Conference in 1967 and 1968. He graduated with his Bachelor of Arts degree in History in 1969, after which he earned his Master of Science degree in Educational Administration from Youngstown State University. James enjoyed a 35-year career as a teacher and football coach, from 1969 to 1971 at Brookfield High School, and from 1971 to 2004 at Howland High School. After retirement, he returned to McDonald High School as a coach from 1999 to 2009. Forming a closeness with and being a positive influence on so many students and athletes over 45 years was a great source of pride and joy. On November 25, 1971, he married the love of his life, Christine, and together they had two children, Jamie and Erin. His family was the most important part of his life, and he treasured his four grandchildren, Paige, Avery, Nico, and Luca. He moved to Easton, MD to be closer to his family, and he enjoyed his time exploring a new city and making new friends. After being diagnosed with leukemia in March of 2021, he continued to live a rich and rewarding life, spending time with his family and friends. He celebrated his 50th wedding anniversary with his family in Ocean City, MD, where he enjoyed watching his grandkids play on the beach and listening to his and Christine’s song, Neil Young’s “Harvest Moon.” James was predeceased by his mother and father, and his brother, Chester Kijowski. He is survived by his brothers Michael, Albert, and Arthur Kijowski; his wife Christine (Carnino) Kijowski; his children James Louis and Jenny (Lim) Kijowski and Erin (Kijowski) and Eric Bodle; and his four grandchildren, Paige and Avery Bodle, and twins Nico and Luca Kijowski. The family requests those who wish to express sympathy to consider making a donation to the Leukemia & Lymphoma Society in James Kijowski’s name.

James Alan Kijowski, 74, of Easton, Maryland, passed away on January 31, 2022, surrounded by his family and loved ones. James was born on April 3, 1947, to Michael and Violet (Borawski) Kijowski in Warren, OH. He graduated in 1965 from McDonald... View Obituary & Service Information

The family of James Alan Kijowski created this Life Tributes page to make it easy to share your memories.

James Alan Kijowski, 74, of Easton, Maryland, passed away on...

Send flowers to the Kijowski family.