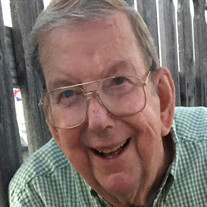 James N. “Jim” Denny, died August 10, 2021 at UMSMC at Easton. He was 88. A native Eastern Shoreman, he was born in Easton, and spent his youth in Royal Oak, where he first gained his lifelong appreciation for the beauty of nature. He moved to Easton in 1955 when he married his beloved wife of 66 years, Mary Wandalie (Wanda) Roberson Denny. He will be remembered as an accomplished artisan, gardener, golfer, choir soloist, devoted husband, caring neighbor and friend to many. He leaves behind many tangible examples of the beauty he strived to share with the world. He was a well known local waterfowl carver whose works won prizes at the annual Waterfowl Festival and other art competitions. He also was an avid gardener sharing his green thumb with his church, St. Mark’s United Methodist Church. The church’s meditation garden and the gardens at the church’s entrance were his inspiration. He spent many hours lovingly tending to those gardens. Perhaps his greatest lasting legacy was his role in creating the Christian Service Window that now graces the St. Mark’s chapel. The large stained glass window depicts the meaning of christian service with a decidedly Eastern Shore theme. He was a fixture in the St. Mark’s choir for many years, often performing solos. He also was Lay Leader at the church, a member of the finance committee and often served as an usher or greeter. He served in the US Navy as an Aviation Boatswain’s Mate during the Korean War. After his military service, he embarked on a career with the telephone company, retiring in 1995 from the Bell Atlantic Telephone Company as an engineer. In addition to his wife, Mr. Denny is survived by a niece, Sharon Denny of Rehoboth Beach, DE, a great niece, Ginny Denny and great nephew, Will Denny of Easton. He was predeceased by a sister, Frances Denny Smith, a brother, William S. Denny Jr., and a nephew, Lee Denny, all of Easton. Funeral service will be held at St. Mark’s United Methodist Church, Easton, on Monday, Aug. 23 at 10:30 am. Memorial donations may be made to Talbot Humane, 7894 Ocean Gateway, P.O. Box 1143, Easton, MD 21601.

James N. &#8220;Jim&#8221; Denny, died August 10, 2021 at UMSMC at Easton. He was 88. A native Eastern Shoreman, he was born in Easton, and spent his youth in Royal Oak, where he first gained his lifelong appreciation for the beauty of nature.... View Obituary & Service Information

The family of James N. Denny created this Life Tributes page to make it easy to share your memories.

Send flowers to the Denny family.