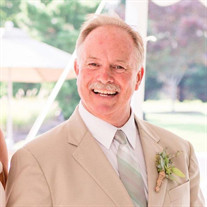 Despite waging a fierce battle to heal his body and come home to his family, on November 3, 2021, God summoned his beloved son, Howard Thomas Cook, Jr., to his heavenly home while surrounded by his loving family. Tommy was born in Easton, Maryland on January 9, 1960 to Howard Thomas Cook, Sr. and the late Lorraine Cook (nee Callaway). As a young man, Tommy helped his Dad on the same family farm where he later settled to raise his own family. Tommy graduated from Queen Anne’s County High School (QACHS) in 1978, where as co-captain he led the baseball team to the school’s first ever state championship earning the team the honor in 2006 of becoming inaugural members of the QACHS Athletic Hall of Fame. Tommy continued to play baseball while attending Chesapeake College and Shepherd College where he earned a degree in Recreation. In 2019, having played men’s modified softball for many years, he was inducted into the Maryland Modified Softball Hall of Fame. In 1986 Tommy began his career at UPS. Tommy’s infectious laugh and happy-go-lucky manner made him a favorite among his customers where each spring the women on his route would demand he break out his uniform shorts having waited to see “those” legs all winter long. Tommy never allowed the long hours at UPS to interfere with spending quality time with his family. He had endless energy and when he played with his kids it was impossible to tell the adult from the children. He rarely missed an event, game or opportunity to celebrate his children. He found joy in the simple things and loved to joke with and make fun of his friends. He LOVED his family and his home with every ounce of his being. Soft-spoken and loyal to a fault, he was a sweet and generous man who lived life to the fullest every day. When Tommy entered a room you smiled because he was that bright light that never dimmed. Tommy loved his country, the Orioles, the Ravens, a good steak, a good cup of coffee, and a big tall glass of cold milk. He loved to be outdoors, to go hunting and any activity that gave him a chance to cut up with family and friends. He drew people in with his fun loving personality and if he met you once he knew you, you probably loved him and he never forgot you. He was the unofficial mayor of the Eastern Shore. He was our rock and we are heartbroken. In addition to his father, Tommy is survived by his wife, Laura, son Jacob Thomas Cook (Shaena), daughter Julia Catherine Clough (Adam), grandchildren Tripp Thomas Cook, Hayes Edward Cook, Emersyn Leigh Cook, Nash Robert Clough and Olivia Lorraine Clough. He is also survived by his sister, Sue Cook Wolff (Bob), brothers and sisters-in-law and many nieces and nephews. Along with his mother, Lorraine Cook, he was preceded in death by his paternal grandparents, William and Louise Covington Cook, and his maternal grandparents, Hazel and Lillian Connolly Callaway. A visitation will be held on Tuesday, November 9, 2021 from 10am - 1 pm at the Centreville United Methodist Church in Centreville, MD, where a service will begin at 1 pm. Burial will follow at the Cook family farm. In lieu of flowers, please consider donating to a charity of your choice.

Despite waging a fierce battle to heal his body and come home to his family, on November 3, 2021, God summoned his beloved son, Howard Thomas Cook, Jr., to his heavenly home while surrounded by his loving family. Tommy was born in Easton, Maryland... View Obituary & Service Information

The family of Howard Thomas Cook Jr. created this Life Tributes page to make it easy to share your memories.

Despite waging a fierce battle to heal his body and come home...

Send flowers to the Cook family.