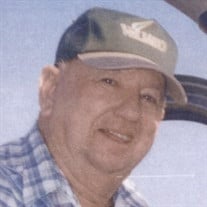 Henry (Mike) Shortall Jr. died peacefully in his sleep on December 4, 2021, surrounded by his loving family. Born in Easton, MD on July 14, 1933, to parents Henry M Shortall and Margaret Esham Shortall. Mike was educated in Talbot County Schools and graduated from Easton High School in 1951. Farming was his life! As a young boy he worked on the farm and after graduation he worked on the family farm, taking over when his father became ill and eventually passed away in 1961. He owned and operated his own farming operation until his retirement in 2017. Even though the diseases of Parkinson's, Dementia and Covid clouded his reality, he was still farming in his mind, driving whatever equipment was necessary for the job and ordering people around him to complete whatever task was needed. He was a great storyteller and would tell whoever was around him the stories of his long life, most that were farming related. A major hobby for him was card playing and he enjoyed many years with his card playing buddies and really missed that when he was no longer able to play. Mike was a long-time member on the Easton Elks Lodge, a past director of Farm Credit in Denton and longtime member of the Farm Bureau. He married his high school sweetheart, Shirley Saulsbury in 1954. He is survived by his wife Shirley, sons Mickey Shortall (Elaine) of Easton and Billy Shortall (Jenny) of Trappe. Grandchildren are Renee' Shockley of Easton, Candice Andrews (John) of Easton, Holly Bonang of Easton and Bill Shortall of Trappe. Great grandchildren are Jagger Shockley, Riley Shockley, Nora Lomax, Thomas Andrews, Bobby Andrews, William Andrews, Ethan Bonang, and Brianna Bonang all of Easton. He is predeceased in death by his parents and sister and brother-in-law Ethel and Billy Bryan of Trappe. Our family would also like to acknowledge our sincere appreciation for the staff at Bayleigh Chase for the care of Mike. They were kind and supportive of Mike and the entire family during this very difficult time. Services will be held Thursday, December 9, 2021, at Fellows, Helfenbein & Newnam, P.A. 200 South Harrison Street, Easton, MD 21601 with a visitation starting at 12:00 PM and services at 1:00 PM. In lieu of flowers, please send donations to St. Jude's Children Research Hospital, 501 St Jude Place, Memphis, TN 38105.

The family of Henry "Mike" Shortall Jr. created this Life Tributes page to make it easy to share your memories.

Send flowers to the Shortall family.