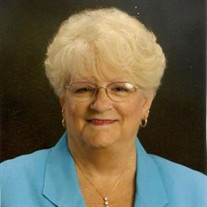 Helen Louise Skinner of Chestertown, MD died on December 9, 2021 at Anne Arundel Medical Center in Annapolis, MD. She was 76 years old. Mrs. Skinner was born on September 24, 1945 in Betterton, MD, the daughter of Emory “Jack” and Emily Brice Bonwill. She graduated from Sudlersville High School with the class of 1963 and married her late husband, William George Skinner, that same year. She attended beauty school in Havre de Grace, MD and owned and operated Emily’s in Chestertown along with her sister for 50 years. She enjoyed spending time at casinos, traveling extensively, and with her family. She was a member of Betterton Methodist Church and Soroptimist International of Kent and Queen Anne’s Counties, where she served in every office. She also served the South Atlantic Region as Governor, and for the Soroptimist International of the Americas as Federation Director. She was an instrument in organizing and participating in the Relay for Life in Kent County. She was preceded in death by her husband, William Skinner; parents, Emory “Jack” Bonwill and Emily Bonwill; and brothers Emory and Brice Bonwill. She is survived by her daughter, Connie Skinner; son, William Skinner, Jr. (Stephanie); grandchildren, Arianna Morris, Kayci Morris, and Levi Skinner; step-grandchildren, Cassie Dyott and Stephen Leager; great-granddaughter Ansley Nelson-Smith; sisters, Elizabeth Knapp and Jacqueline Conley; as well as many nieces and nephews. Services will be held on Friday, December 17 at 11:00 am at Fellows, Helfenbein, and Newnam Funeral Home in Chestertown. A viewing will be held the night prior on Thursday, December 16 from 5:00 – 7:00 pm at the funeral home. Interment will be held at Crumpton Cemetery. In lieu of flowers, memorial donations can be made to the Soroptimist International of Kent and Queen Anne’s Counties at P.O. Box 535, Chestertown, MD 21620.

The family of Helen Louise Skinner created this Life Tributes page to make it easy to share your memories.

Send flowers to the Skinner family.