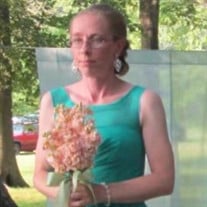 Heather Lynn Price of Crumpton, MD died on April 25, 2021. Heather was born on September 20, 1981 in Chestertown, MD, the daughter of Laura “Lam” Schuyler and the late Leslie Price and sister of Dana Price. She graduated from Queen Anne’s County High School with the class of 2000 and went on to study at Garrett Community College. In 2004, she was married to James Truitt. She found work at several nurseries and did some landscaping, as well as working at Radio Shack. She currently worked at Phillips Garage as a cashier. Heather was known for her love of camping, kayaking, and being outdoors. She recently began doing volunteer work at the Taino Woods Native American Sanctuary. When she wasn’t spending her free time volunteering or relaxing outside, she enjoyed gaming, playing cards, music, and attending Renaissance Festivals. Her most cherished time was spent with her children. She will be remembered for her quick wit and one-liners that never failed to make those around her laugh. She was predeceased by her son, Eric Hardy; father, Leslie Price; Dave Hershberger, father of her son Jesse; maternal grandparents Vernon and Helen Lam; and paternal grandparents, Jesse and Merritt Price. She is survived by her sons Jay and Jesse Truitt both of Crumpton, MD; mother and step-father Laura and Dale Schuyler of Crumpton, MD; sister, Dana Price (TJ) of Greensboro, MD; step-brothers, Brian Lam of Millington, MD, Mathew Lam (Melissa) of Barclay, MD, and Dale Schuyler Jr. (Julie) of Hurlock, MD; step-sister, Stephanie Schuyler Keene (Joey) of Federalsburg, MD; step-mother, Sandra Price of Henderson, MD; ex-mother-in-law, Tina Thomas of Centreville, MD; ex-husband, James Truitt of Dover, DE; best friend, Amanda “Pandora” Aiken; nieces and nephews Angelis, Colby, Kayleigh, Katelyn, Travis, Brendon, Brianna, Brianna K., Mathew, Olivia, Robbie, Katie, Cody, and Abby; as well as numerous aunts and uncles. Services will be held at Fellows Family Funeral Home in Millington, MD on Sunday, May 2. There will be a viewing from 2:00 – 4:00 pm with services at 4:00 pm. In lieu of flowers, the family has asked that donations be made to Jay and Jesse’s college funds, courtesy of BB&T Bank.

Heather Lynn Price of Crumpton, MD died on April 25, 2021. Heather was born on September 20, 1981 in Chestertown, MD, the daughter of Laura &#8220;Lam&#8221; Schuyler and the late Leslie Price and sister of Dana Price. She graduated from Queen... View Obituary & Service Information

The family of Heather Lynn Price created this Life Tributes page to make it easy to share your memories.

Send flowers to the Price family.