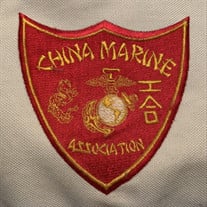 Harrison “Bud” Moreland Cooper of Chestertown, Maryland, died on Thrusday, March 24, 2022, at his home. He was 94. He was born on January 3, 1928, in Wilmington, DE, to the late H. Earle Cooper and Anna M. Cornelius. He attended Chestertown High School, class of 1945. After graduation he worked for his father until the fall of 1945 when he enlisted in the United States Marine Corps. From 1946 to 1948 he served overseas in North China until being honorably discharged in 1948. Mr. Cooper then began classes at Goldey-Beacom Business School in Wilmington, DE. After two years, he returned to work with his father again and became co-owner of Cooper’s Hardware Store in Chestertown, MD. On October 2, 1982, he married Helen Willey of Oxford, MD. In 1986, they sold the hardware business, retired, and made their home in Kingstown. On December 4, 2003, his wife of 21 years predeceased him. Mr. Cooper was a Past Master of the Masonic Chester Lodge #115, member of the 1st Marine Division Association, and the China Marine Association. He enjoyed socializing with the people he met at Dixon’s Auction in Crumpton, watching the Chester River from his porch, and spending time with family and friends. Mr. Cooper is survived by two daughters, Barbara Cooper Gorrow (Bill) of Chestertown, MD, and Cynthia Cooper Bryden (Will) of Kennedyville, MD, both from his earlier marriage to Margaret P. Cooper; two stepchildren, Margaret “Peg” Favinger (Joe) of Easton, MD, and Aulby Bates III (Lee) of St. Michaels, MD; four grandchildren, Kaitlin Gorrow, Jennifer Dunker, Katie Manes, and Tom Ringgold; four great-grandchildren, Nate Dunker, Maddie Dunker, Darcy Manes, and Abigale Manes; honorary granddaughter Etiennette Berry of St. Barthelemy, FWI, and special friend, Pam Hartlove. A visitation will be held on Monday, March 28, from 9:45 to 10:45 at Fellows, Helfenbein & Newnam in Chestertown. Graveside service will follow at Oxford Cemetery, Oxford. MD at noon. In lieu of flowers, memorials may be offered to St. James U.M. Church, PO Box 156, Worton, MD 21678 or Compass Hospice 160 Coursevall Drive, Centreville, MD 21617.

The family of Harrison "Bud" Moreland Cooper created this Life Tributes page to make it easy to share your memories.

Send flowers to the Cooper family.