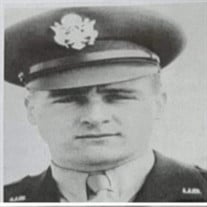 Harold Wood Joiner, age 101, of Chestertown, MD, passed away at his home in Chestertown. He was the son of the late, Alan and Ida Wood Joiner and was the Husband of the late Henrietta Gill Joiner, who passed away in 2012. He is survived by a son, Gregory Wells Joiner of Chestertown, MD and was pre-deceased in 1963 by two sons Donald Wood Joiner and Gill Joiner, and a brother William Alan Joiner in 1995. Harold Wood Joiner was born in Talbot County, Easton, MD on November 10, 1920 and attended Kent County Schools, graduating from Chestertown High School in 1937. In 1942, he married Henrietta Gill. He worked for Paul Joiner at the Worton Implement Company, in which he later owned and operated with partner Thomas Taylor. In 1964, he went to work for the Clement Supply Company, a John Deer Dealer in Clayton, DE where he worked until his retirement in 1988. In 1943, during W.W. II he enlisted in the Army Air Corps and was a First Lieutenant and pilot flying a B-25 in Northern Africa, Italy and the European Theatre with the 321st Flight Group and 447th Bombardment Group where he flew 52 Consecutive Combat Bombing Missions. Upon his return from the European Theatre to the States, he was stationed for 18 Months as a Flight Instructor in Greenville, SC. and then was Honorably Discharged in June of 1945. Mr. Joiner was an active member of Christ Methodist Church in Chestertown, MD where he faithfully served throughout the years. He was a member of Chester Masonic Lodge No. 115 A.F. & A.M. with 76 Years of active service as a Mason, and a member of all three York Rite Masonic bodies in Denton, MD with Temple Lodge No. 128, and a member of the Shriners of Maryland. He was honored last year on November 14, 2020, was declared by the Mayor of Chestertown, MD to be Harold Joiner Day. This was a celebration of his 100th Birthday and his service as a WWII Veteran. Harold Joiner was a dedicated and faithful servant to the community, his church, Chester Lodge No. 115 and the York Rite Masonic Bodies where he was presented the Triple Tau Award for his Meritorious Service on behalf of the Grand Chapter of Royal Arch Masons along with many other citations for his years of dedicated Military and Masonic Service. In addition to his son Gregory Wells Joiner, “Pop Joiner” is survived by his extended Family of the Heart Ginny and Jim Teitt, Seven Grandchildren and Ten Great Grandchildren of Ohio, as well as Mark and Mary Pat Kutz of Crumpton, Maryland. A Celebration of Life for Harold Wood Joiner will be held on Saturday, April 23 at 10:30 am at Christ United Methodist Church in Chestertown.

Harold Wood Joiner, age 101, of Chestertown, MD, passed away at his home in Chestertown. He was the son of the late, Alan and Ida Wood Joiner and was the Husband of the late Henrietta Gill Joiner, who passed away in 2012. He is survived by... View Obituary & Service Information

The family of Harold Wood Joiner created this Life Tributes page to make it easy to share your memories.

Send flowers to the Joiner family.