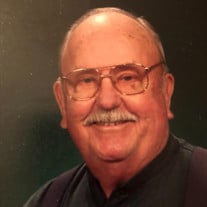 George “Buddy” Alfred Erickson, Jr. of Centreville, MD passed away on April 28, 2021 at his home. He was 92. Born on January 14, 1929, in Annapolis, MD, Buddy was the son of the late George and Emma Stevens Erickson. He was raised in Eastport and graduated from Annapolis High School in 1947. He then completed a BA in Business Administration from the University of Maryland, College Park, then after a brief stint in the US Air Force, he joined his father in their car dealership, Erickson Motor Company in Eastport. He married Barbara Jane Kuhn on June 30, 1957, and they began to raise their family in Bay Ridge. After the car dealership business was sold in 1971, Buddy then joined the assessors division of Anne Arundel County, and later the Maryland Department of Assessment and Taxation, retiring in 1991. He was also a member of the Board of Directors of the former Chesapeake Savings and Loan Association of Annapolis. While in business, Buddy was involved with the Optimist Club of Annapolis. He was a member of Eastport United Methodist Church from birth and was an active member until moving. Buddy moved from Annapolis to a 30 acre farm outside of Centreville in 1977. While in Centreville he was a member of Centreville United Methodist Church. The farm at one time was noted for its pick-your-own strawberry field. Buddy was happiest surrounded by kids; his own, his grandchildren, or any others! He also was sure to start a big vegetable garden each spring, both while living in Bay Ridge and on the farm. Buddy was predeceased by his wife Barbara to whom he was married for 60 years, his parents, and two sisters, Elaine Holidayoke and Beverly Westlake. He is survived by his children Myreda Erickson-O’Brien of Annapolis, George W. Erickson of the home, William Erickson (Peggy) of Morehead City NC, Mary Woodruff (Paul) of Montpelier VA, Donald Erickson (Veneasa) of Bourbon, MO, Anna Erickson of Annapolis, and Evelina Erickson (Van Vogel) of Annapolis, as well as four grandchildren; Michael O’Brien (Angela Porto) of Denver, CO, Kelly and Patrick O’Brien of Annapolis, and Kelly Erickson of New York City. Services will be held on June 1, 2021 at 10 am at the Centreville United Methodist Church. In lieu of flowers a donation may be made to Centreville United Methodist Church, 608 Church Hill Road, Centreville, MD 21617.

The family of George Alfred Erickson Jr. created this Life Tributes page to make it easy to share your memories.

Send flowers to the Erickson family.