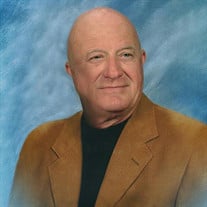 Gary Clifford Royer, 78 passed away November 12, 2021, after a 30+ years of heart disease. Gary was an honorable man that served his town of Easton, Maryland, and the state of Maryland for many years. Gary was born on February 15, 1943, in Easton, MD to his parents Clifford S. Royer and Iva Jeannette Sinclair. Gary graduated from Easton High School in 1961. He attended Salisbury State Teachers College in 1961 and graduated from a Business Mechanics course from Goldey Beacom in 1963. Gary married Lee Warner on March 21, 1964, at St Marks United Methodist Church. They celebrated their 57th wedding anniversary this year. Gary worked with his father at the Easton Tasty Freeze from age 12 to age 19. After graduating from Goldey Beacom he worked for Family Finance in Easton until he was accepted into the Maryland State Police Academy in 1964. Upon graduation from the Maryland State Police Academy he was assigned to the Waldorf Barrack. He then served several other Barracks throughout the state, advanced to 1st Lieutenant and ended his employment with the Maryland State Police in January of 1990 as commander of Barrack I Easton. During his employment he was a radar operator, breathalyzer operator, and a firearms instructor. He was also assigned to be chairman on the interview board for potential candidates for the Maryland State Police. Gary always said that during his time with the Maryland State Police, that there wasn’t a day that went by that he didn’t enjoy his work. Gary loved cars. Especially his 1976 El Camino. He enjoyed many hours of soft crabbing in his Chincoteague scow which he had built in 1973, while also enjoying the time he spent with his children waterskiing in his Grady White. He loved to travel to Cancun and take many cruises to the Caribbean and Europe. Gary was a member of St Marks United Methodist Church. He was a life member of BPOE 1622, The Elks Lodge, a member of the Moose Lodge, a member of FOP and associate member of V.F.W. & American Legion. He also served as a member of the Talbot County Board of Liquor Commissioners for many years. Gary was preceded by his parents: Clifford S. Royer and Iva Jeannette Sinclair. He is survived by his loving wife: Lee Royer; his two children: G. Aaron Royer (Melissa) and Amber Royer Dulin (Geoff); seven grandchildren: Joseph A Royer, Sarah Jane Golden, Jaclyn Royer, James Ford III, Elizabeth Tefft, Daniel Royer, Jakob Pollard; his great-grandchildren: Joseph Jr, Eastyn, Edward, and Bentley; A sister: Rosanne “Rosie” Royer (Lisa); and a niece: Kelly Knopp. The family requests that in lieu of flowers donations be made to the Easton Elks Lodge Scholarship Fund, 502 Dutchmans Ln, Easton MD, 21601 and/or the St Marks United Methodist Scholarship Fund, 100 Peachblossom Rd, Easton MD, 21601. There will be a funeral service held on November 23, 2021, at St Marks United Methodist Church at 11:00am. With visitation one hour prior to service.

Gary Clifford Royer, 78 passed away November 12, 2021, after a 30+ years of heart disease. Gary was an honorable man that served his town of Easton, Maryland, and the state of Maryland for many years. Gary was born on February 15, 1943, in... View Obituary & Service Information

The family of Gary Clifford Royer created this Life Tributes page to make it easy to share your memories.

Send flowers to the Royer family.