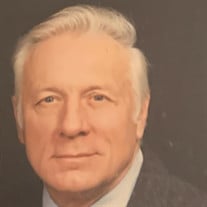 Frederick A. “Fritz” Wilson of Easton died on August 15th, 2021, at his home. He was 93. Mr. Wilson was born in McKeesport, PA on April 17th, 1928, to the late Frederick and Louise R. Wilson. Fritz’s father emigrated from Cookstown, Northern Ireland, in 1923, arriving in Boston, and settled in McKeesport, PA. On June 12, 1953, Fritz married the late Nancy Rausch to whom he was married for 60 years before her passing in 2013. After serving in the US Navy after WWII from 1946 - 1948, he earned his master’s degree from Carnegie Mellon University in Electrical Engineering. He then went on to work for Delmarva Power for 34 years. Mr. and Mrs. Wilson lived on the Eastern Shore shortly after graduating from college, mostly in Salisbury, until he moved to Elkton in 1984. Mr. and Mrs. Wilson retired in 1990 on the Tuckahoe River near Denton in Caroline County; they finally moved to Easton in 2011 to a retirement community. Mr. Wilson is survived by his children; Scott Wilson and wife Suzanne, Cathy Jo Swanson and her husband Marc and Christopher Wilson and his wife Elizabeth, and seven grandchildren. Funeral services will be held on Friday, August 20th at 1:00pm at the Maryland Eastern Shore Veterans Cemetery, 6827 E. New Market Ellwood Road, Hurlock, MD. In lieu of flowers, memorial donations may be made in Frederick Wilson’s name to Shore Harvest Presbyterian Church, 9560 Black Dog Alley, Easton, MD 21601 For online tributes and to sign the online guest book, please visit: www.fhnfuneralhome.com

The family of Frederick A. Wilson created this Life Tributes page to make it easy to share your memories.