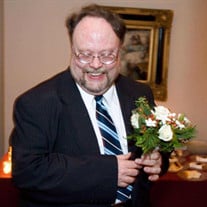 Francis Joseph Crowne, Jr. (aka Frank Crowne), 75, of Centreville, Maryland, passed away in his sleep on October 24th after a brave battle with Alzheimer’s Dementia. Born to Frank and Alice Crowne in Pleasantville, New Jersey, he spent much of his youth moving around the world. Frank graduated from Catholic University and went on to receive his PhD in Physics from Brown University. He enlisted in the military soon after, but was never deployed to Vietnam. After a post-doc in Paris, he worked as a theoretician for the Army Research Lab in Adelphi, Maryland and Lockheed Martin in Baltimore. In addition to his work in physics, Frank also worked as a translator of Russian, Chinese and Japanese scientific journals. He was also a wonderful classical guitarist and tenor. While these talents earned him the respect of his peers, it was his huge and loving heart that will be most remembered. The oldest of six children, he was loved and admired by his siblings. After marrying the love of his life, Sharon (Burgett), he went on to raise two children who adored him. He never hesitated to sacrifice anything for the sake of his family. From being there every step of the way during his daughter’s battle with cancer to making sure his son never felt neglected or less important, he was the dream dad. He got his family through all the ups and downs that came their way. Even as his Alzheimer’s Dementia took hold, he continued to crack his silly jokes and loved to play with and love on his four grandchildren. Frank is survived by his loving wife of 48 years, Sharon (Burgett); his daughter Theresa (Durnbaugh), her husband Bill of Broomes Island, MD and their children Liam and Sarah; son Scott and his wife Leah (Schenck) of York, PA and their daughters Aivleen and Veronica; his brother Jim and wife Jamie and their children Adrian and Justin and three grandchildren; his sister Shari (Corley) and her husband Bob; his sister Kathy (Kuhn) and her husband Jack and their children John, Joe, Laura, Kari and Alison and five grandchildren; his brother Greg and wife Becky and their children Evan and Kyle; his sister in law Jennifer and her children Liz and Michael; and a very large, wonderful extended family. He is predeceased by his father Frank J. Crowne Sr. and mother Alice (Marshall) Crowne; and his beloved brother Jeff, husband to Jennifer. He will never be forgotten…. A visitation will be held on Wednesday, November 3, 2021, from 6-8 pm at the Fellows, Helfenbein & Newnam Funeral Home, P.A. in Centreville, MD. A mass will be held on Thursday, November 4, 2021, at 11 am at Our Mother of Sorrows Catholic Church in Centreville, MD. Burial will follow in St. Peter’s Cemetery in Queenstown, MD. In lieu of flowers, donations may be made to the Alzheimer’s Association,225 N. Michigan Ave, FL. 17, Chicago, IL 60601

Francis Joseph Crowne, Jr. (aka Frank Crowne), 75, of Centreville, Maryland, passed away in his sleep on October 24th after a brave battle with Alzheimer&#8217;s Dementia. Born to Frank and Alice Crowne in Pleasantville, New Jersey, he spent... View Obituary & Service Information

The family of Frank Crowne created this Life Tributes page to make it easy to share your memories.

Send flowers to the Crowne family.