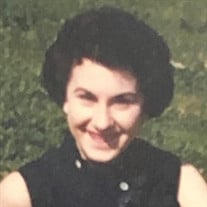 Frances Barbara Alfieri Egelanian passed away peacefully surrounded by family on Sunday, October 31, 2021 in Baltimore, MD. She was 89. Born on August 19, 1932 in Dunmore, PA, Frances was the youngest seven children born to Michael Alfieri, an emigre from Serracapriola, Province of Foggia, Apulia, Italy, and Elizabeth Russoniello from Dunmore, PA. Frances (known as “Baby” to her siblings) graduated from Dunmore High School in 1950 and later moved to Washington D.C where she worked at Bonds Department Store as a bookkeeper, and met her husband Walton Egelanian of 65 years. Frances and Walton married on December 18, 1954 and together raised four children in College Park, MD. Known to each other as “Harry” and “Ege”, the two were the definition of “opposites attracting”. Frances was the emotive always involved Italian mother and he the quiet patient electrical engineer. Frances’ greatest joy was being with her children and grandchildren, and her extended Pennsylvania family whom she cherished dearly. Her personality and exuberance for life was palpable, and her spirit will live on in generations to come. Although Frances moved away from Northeastern Pennsylvania, she never really left home, returning often with her family and being seen by many of her nieces and nephews as more of a second mother than aunt. After decades in the Washington, D.C area, she and Walton returned to Scranton, PA in 1994 where they lived for 15 years before later moving to Easton, MD in 2009. Frances was a devout Catholic and was an active volunteer first at Holy Redeemer Church and DeMatha High School in Maryland, and later at Saint Rocco’s Church and Saint Francis of Assisi Kitchen in Scranton and at Saints Peter and Paul Parish and the Society of Saint Vincent de Paul in Easton, MD. After being diagnosed with Multiple Myeloma (an often-fatal blood cancer) in 1990, she became part of a clinical trial endowed by the Walton Family (Walmart) at UAMS in Little Rock, AR where she not only survived the disease, but remained until recently in the program that produced much of the groundbreaking research that today saves and extends the lives of many Multiple Myeloma patients She is survived by her daughter, Taryn L. Egelanian, Berwyn Heights, MD; son, Nick A. Egelanian, Annapolis, MD; daughter, Erica E. Shuman, Annapolis, MD; son, Walton (“Wally”) A. Egelanian, Brooklyn, NY; granddaughter, Hannah E. Shuman, New York, NY; granddaughter, Sophie L. Shuman, Annapolis, MD; grandson, Jason A. Egelanian, Portland, OR; and granddaughter, Leah N. Egelanian, Honolulu, HI. In addition to her parents and six older siblings, Frances was predeceased by her husband Walton Egelanian, Easton, MD, who passed away on December 15, 2019. Visitation for friends and family will be held from 3-7 PM on Friday, November 5 at the Fellows, Helfenbein & Newnam Funeral Home located at 200 S. Harrison Street, Easton, MD 21601 (Ph: 410-822-3131). The funeral will take place at 10:30 AM on Saturday, November 6 at Historic St. Joseph’s Catholic Church located at 13209 Church Lane, Cordova, MD 21625. A burial service will take place immediately after at St. Joseph’s Cemetery adjacent to the church. A reception will take place from 1-3 PM at Osteria Alfredo (Frances’ favorite restaurant) at 210 Marlboro Avenue, Easton, MD 21601. In lieu of flowers, the family requests that donations be made to Frances’ favorite charities: St. Vincent de Paul, Easton, MD https://svdpeastonmd.org/giving and St. Francis of Assisi Kitchen, Scranton, PA https://interland3.donorperfect.net/weblink/WebLink.aspx?name=E13346&id=2

The family of Frances Barbara Egelanian created this Life Tributes page to make it easy to share your memories.

Send flowers to the Egelanian family.