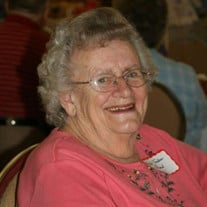 Ethel Mae Toulson went home to be with the Lord on May 11, 2022, surrounded by loved ones at her home in Rock Hall. She was 88 years old. She was born in Skinners Neck on November 2, 1933, the daughter of John Henry and Frances Elburn Boulter. She grew up in Skinners Neck, attending Skinners Neck School and later graduating from Rock Hall High School in 1952. She worked as a tomato canner at Rock Hall Canning Company while she was still in school. After graduating, she became a switchboard operator for C&P Telephone. She was working at C&P the day of the defense plant explosion in 1954, providing communication during a difficult and vital time. She and many other switchboard operators worked tirelessly for days to keep communications going. Eventually, she became an Assignment Clerk with C&P’s engineering department. She retired in 1994 but continued working part-time as a switchboard operator for the hospital and then for 10 years for the Kent County Health Department. She and her husband, the late James A. “Junior” Toulson, raised four children together. She was a very active lifetime member of Raum Chapel in Skinners Neck and was a member of the Rock Hall Volunteer Fire Company Auxiliary for 60 years, and was president of the auxiliary for about 40 of those years. She enjoyed cooking, and making ceramics, but she was most well-known for her incredible baking. Her most famous recipes were her home-made dinner rolls, caramel cake, coconut cake, and five-flavored pound cake. There was never a boxed cake or store bought jar of apple sauce in their home – Mrs. Toulson insisted on homemaking them. She was preceded in death by her husband, James A. “Junior” Toulson and sister, Jean Dowling. She is survived by her daughters, Sharon Truitt and Andrea Edwards (Timmy); sons, Jeffrey Toulson and John “T-Bird” Toulson; brother, Albert Boulter (Mary); sister, Nelda LeCompte; grandchildren: Cheri (Chuck), Joseph(Brooke), Dakota (Morgan), Wyatt, and Chloe; great-grandchildren: Drew, Jonny, and Emmi; as well as many nieces, nephews, “adopted” children, and her beloved chihuahua, Heidi. A visitation will be held on Saturday, May 21 from 6:00 – 8:00 pm at the Rock Hall VFC. Services will be held on Sunday, May 22 at 1:30 pm at Raum Chapel UMC, with a reception to follow at Rock Hall VFC. In lieu of flowers, memorial donations can be made to Raum Chapel UMC: C/O Debbie Nelson 4985 Piney Neck Rd, Rock Hall, MD 21661, the Rock Hall Volunteer Fire Company at P.O. Box 577 Rock Hall, MD 21661, or Compass Regional Hospice, 106 Coursevall Dr, Centreville, MD 21617.

Ethel Mae Toulson went home to be with the Lord on May 11, 2022, surrounded by loved ones at her home in Rock Hall. She was 88 years old. She was born in Skinners Neck on November 2, 1933, the daughter of John Henry and Frances Elburn Boulter.... View Obituary & Service Information

The family of Ethel Mae Toulson created this Life Tributes page to make it easy to share your memories.