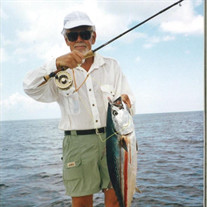 Edward Francis Kilduff III, known as Ed or “Fast Eddie” to his many friends and family members, passed away peacefully at home surrounded by his loving family on November 20, 2021. He was a loving and caring husband, father and grandfather and will be remembered as a compassionate, energetic, and extremely generous person with an irreverent sense of humor. He had a lifelong curiosity and love of learning, enjoyed gardening and cooking, and was an avid fly fisherman. He was a mentor to many and taught important life lessons to his children and grandchildren through the years. Ed was born in Queens, NY, February 1, 1940, to Frances Mae Mildern and Edward Francis Kilduff, Jr. He graduated from Rice Catholic High School in New York city and served in the US Marine Corps Reserves before receiving a B.A. from Syracuse University, College of Environmental Science and Forestry. After graduation from college, Ed studied European New Towns under the auspices of Urban America, Inc. He visited and conferred with planning staffs and officials of New Towns in Great Britain, Finland, France, Sweden, and Leningrad and Moscow in the former Soviet Union. Ed then moved to Maryland where he spent his career as a noted Landscape Architect. He was an expert in Land Planning and was recognized by Planning Commissions and Boards of County Commissioners throughout the Tri-state area. Ed was appointed to many governmental Executive Committees and was often called on to testify as an expert witness at Boards of Zoning Appeals. He was a guest speaker at local colleges and universities in the Washington area, including the University of Maryland and George Washington University. Early in his career he worked at T.D. Donovan and Associates where he was responsible for a wide range of land planning and landscape architectural projects, including commercial complexes and shopping malls, health care facilities, educational institutions, cemeteries, major multi-family and single-family housing developments, and numerous park and recreation projects. He was a consultant on the development of the new community of Montgomery Village, MD. Ed continued his career with The Maryland-National Park and Planning Commission where he was the Chief Landscape Architect and Chief of the Engineering and Design Division with direct responsibility for the efforts of a large professional staff charged with design and construction of parks and recreation projects within Prince George’s County, Maryland. He guided the completion of an $18 million project that resulted in swimming pool complexes, ice skating rinks, golf courses, community center buildings, campgrounds, hiker-biker trail systems and local and regional parks. He worked as a consultant for land planning as a Division Chief Team Member for the development of Prince George’s County Master Plans as well as the County Master Plan of Parks. In 1975, Ed established Kilduff Associates, PA for the practice of Land Planning, Landscape Architecture and Park and Recreation Planning. Later the name was changed to Kilduff/Nagy Landscape Architects. His company was responsible for projects throughout Montgomery, Charles and Prince Georges counties, including dozens of schools, Lake Artemisia Park in College Park, the Hyattsville Justice Center, the Wesley Theological Seminary Courtyard, and many other public buildings. Kilduff/Nagy Associates was notable throughout the Washington, D.C. - Baltimore metropolitan area for their innovation and quality of their projects. In his leisure time Ed pursued his passion for fly fishing and fly tying. He traveled the world with friends to fish for steelhead in Alaska, Michigan, and on the Dean River in British Columbia; for tarpon, bonefish and permit in the Florida Keys, Puerto Rico, the Bahamas, Mexico, and Belize, and for salmon in Iceland, Norway and Alaska. In addition, his passion for fly fishing took him to the Amazon region of South America and several places in Central America. Locally he enjoyed fishing for brown trout in streams in Pennsylvania and Maryland and for rockfish in the Chesapeake Bay. Ed was always willing to work with young people and share his knowledge and expertise of fishing. Everyone he met throughout his travels became a friend. Ed’s greatest joy in life was his family. He is survived by his beloved wife Diane Capello Kilduff, to whom he was married for 48 years. They have two wonderful daughters: Meredith Young and her husband Michael who live in Davidsonville, MD with their two children, Conor and Charlotte, and Erin Barker and her husband Patrick who live in Chesapeake, VA. with their two children, Alaina and Dominic. Ed was always happiest when his children and grandchildren were visiting and he could enjoy time cooking, swimming, fishing and being with them. He is also survived by his brothers, Kevin (Kathy) of Homosassa, FL, Michael (Carol) of Spring Hill, FL, and John (Carolyn) of Homosassa, FL along with several nieces and nephews. A celebration of his life will be held in the new year. Memorial contributions may be made in Ed’s memory to Talbot Hospice, 586 Cynwood Drive, Easton, MD 21601 or the Bay Journal Fund, PO Box 300, Mayo, MD 21106.

Edward Francis Kilduff III, known as Ed or &#8220;Fast Eddie&#8221; to his many friends and family members, passed away peacefully at home surrounded by his loving family on November 20, 2021. He was a loving and caring husband, father and... View Obituary & Service Information

The family of Edward Francis Kilduff created this Life Tributes page to make it easy to share your memories.

Edward Francis Kilduff III, known as Ed or “Fast Eddie” to his...

Send flowers to the Kilduff family.