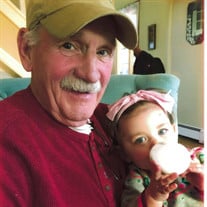 Edward “Eddie” Thomas Fischer of Kennedyville, MD passed away on July 2, 2021 at Christiana Hospital in Newark, DE. He was 73 years old. Eddie was born on September 9, 1947 in Philadelphia, PA, the son of Robert and Elizabeth Fischer. He became an Eagle Scout in 1961, Explorer Host 75. He was a graduate of the Frankford High School in Northeast Philadelphia, Class of 1965, where he excelled academically and as team captain / offensive lineman on the football team. Eddie was awarded the Scholar Athlete Award. He went on to graduate in 1969 from Ursinus College, Collegeville PA with a Bachelor’s degree in Political Science. He was a 4-year starter for the Ursinus Grizzly Bears football team. Eddie served in the U.S. Army in Vietnam as an Intelligence Officer and was the recipient of the Bronze Star for heroic and meritorious achievement. After being discharged in 1972, he continued to serve his country in the National Guard, First City Troop Philadelphia. Eddie was known for his eye for design and his ability to fix anything and everything. He loved remodeling and restoring historical homes with his wife and life partner Mary Ann. He was a successful businessman who owned and operated his own insurance agency for a number of years. “Eddie Pi Junior” was beloved nickname that developed over the years, the origin of which is cloudy but always got a good laugh. Eddie’s awesome sense of humor and caring, giving and selflessness to his family, friends, and strangers alike will endear him to so so many of us… forever. Edward T. Fischer is survived by his wife, Mary Ann Fischer; daughter, Angel Fischer; son-in-law, John Miller, granddaughter, Sunny Miller; brother, Robert Fischer; nieces, Susan Fischer and Missy Fischer; nephews, Michael Fischer and Bobby Fischer; brothers Jim and Bill Fischer; sister Betty Ann Fischer as well as his dog, Luna. In lieu of flowers, the family has asked that you pay forward an act of kindness or support Wounded Warriors in memory of Eddie Fischer. A celebration of life will be scheduled in the next few months in Philadelphia, as well as local Kent County MD tribute. Eddie was a man of deep faith and Catholic beliefs and principals; he is with the Lord now. God Bless You Eddie.

Edward &#8220;Eddie&#8221; Thomas Fischer of Kennedyville, MD passed away on July 2, 2021 at Christiana Hospital in Newark, DE. He was 73 years old. Eddie was born on September 9, 1947 in Philadelphia, PA, the son of Robert and Elizabeth Fischer.... View Obituary & Service Information

The family of Edward "Eddie" Thomas Fischer created this Life Tributes page to make it easy to share your memories.

Send flowers to the Fischer family.