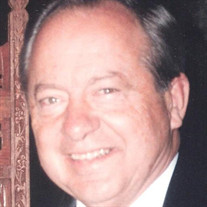 Edgar Thomson Bellinger of Oxford, Maryland, passed away on March 31, 2021 at age 91. He was born to John Bellinger Bellinger and Margaret Thomson Bellinger, on September 23, 1929 in New York, NY. Edgar graduated from St Albans School and received a BA from Haverford College in 1951, followed by a JD from George Washington University in 1957. After law school he served as Law Clerk to the Chief Judge of the U.S. District Court for District of Columbia. He then served as Assistant U.S. Attorney for the District of Columbia. After leaving government service, he joined the firm of Pope, Ballard, and Loos and later the firm of Zuckert, Scoutt, and Rasenberger, before starting his own firm in Easton. Edgar particularly loved boating, tennis, paddle tennis, and golf. He built his first boat in his parents’ garage and loved to motor on the Chesapeake Bay. He played on the St Albans, Haverford, and George Washington University tennis teams. He also taught tennis at the Landon School during law school. An ardent fan of the Washington Football Team, he remained loyal through all the team’s ups and downs. Upon entering his home in Oxford, no one could have any doubt where his football team loyalties lay. Edgar was married to Ann Clark Bellinger. He is survived by his former wife Adrian D. Bellinger; his children Edgar Thomson Bellinger Jr and wife Julia J. Bellinger, Robert Benet Bellinger and Natalie Wilensky, Margaret Bellinger McChesney and Peter S. McChesney; his step-children Jack Stevens, Jennifer Stevens, and Julie Plants; and 7 Bellinger and 4 Stevens grandchildren. Edgar was predeceased by his wife Ann, his parents John and Margaret, and his brother John Bellinger Bellinger, Jr. Edgar’s memorial service will be held outside at the Church of the Holy Trinity in Oxford, MD, on Saturday, April 17th, at 1:00 PM. In lieu of flowers, donations can be made in his honor to the Oxford Volunteer Fire Department or The Church of the Holy Trinity.

The family of Mr. Edgar Thomson Bellinger created this Life Tributes page to make it easy to share your memories.

Edgar Thomson Bellinger of Oxford, Maryland, passed away on March...

Send flowers to the Bellinger family.