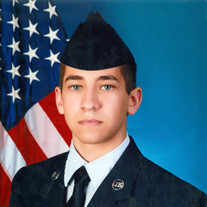 A1C Dewayne Austin Stevens of the United States Air Force, from Chester, Maryland, passed away on Thursday, March 24, 2022, at his duty station at Nellis Air Force Base in Las Vegas, Nevada. Dewayne was 21 years of age. Born in Germany on January 26, 2001, Dewayne Austin Stevens is survived by his mother Gueler Stevens and his stepfather Stephen Scott Zakszeski of Chester, Maryland and his father Charles Austin Stevens and his wife Christy Stevens of Kirbyville, Texas. Dewayne is also survived by his half-sister, Braleigh and her mother Kristy Odom, his grandmothers Sharon Zakszeski, Christhilde Kaminski and Yvonne Stevens, his great-grandmothers Christel Schuhmacher and Beverly Brussard, his godmother Stefanie Smith and family, his uncle Hakan Atakul and family, his aunt Cigdem Camacho and family, his aunt Tina Rhynes and family, his aunt Jennifer Stevens Nevils and his uncle Chad Stevens, his aunt Stephanie and uncle Greg Crawford and cousins Lara and Lena Kunz, Roberto and Iliana Camacho, Dakota DeVille and wife, Madison DeVille, Brock Nevils, Abigail Nevils and fiancée, and many more friends and family whose hearts he touched in his life. Dewayne grew up with his mother in Baumholder, Germany and moved to the United States in June of 2013 at the age of 12. Dewayne graduated from Kent Island High School in 2019 and after a brief time at college, Dewayne decided to enlist in the United States Air Force on December 15, 2019, as an F-22 Crew Chief. Dewayne loves his mother, Dewayne loved playing PlayStation and making friends along the way. Dewayne made many friends in his lifetime, and nobody was ever a stranger to him. Dewayne is a very kindhearted, loving, funny and sarcastic young man. A visitation will be on Saturday, April 2, 2022, from 12pm to 3pm at Fellows, Helfenbein & Newnam Funeral home, P.A. in Chester, where the funeral service will be at 3:00pm. In lieu of flowers, the family is requesting to please send donations in remembrance of Dewayne to help support our veterans in need https://ptsdusa.org/give-help/ or any other organization for PTSD.

A1C Dewayne Austin Stevens of the United States Air Force, from Chester, Maryland, passed away on Thursday, March 24, 2022, at his duty station at Nellis Air Force Base in Las Vegas, Nevada. Dewayne was 21 years of age. Born in Germany on... View Obituary & Service Information

The family of A1C Dewayne Austin Stevens created this Life Tributes page to make it easy to share your memories.

Send flowers to the Stevens family.