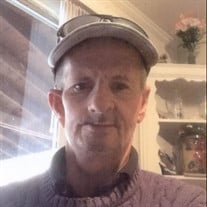 Dennis Mark Wooters, Sr. of Preston, passed away peacefully at home on April 24th surrounded by family. Born in Easton, MD on August 13th, 1959, to Holton Wooters and the late Sadie Pearson Wooters, Denny attended school at the Little Red School House in Longwood and later in Easton. Denny worked on a milk truck with his brother Matt, driving for WIC, and then went on to work as a mechanic and on the farm. He would put everything aside to do be with his family; and was always the first to lend a helping hand, asking for nothing in return. Denny loved the outdoors, especially camping and walking the trails. He is survived by his wife, Tina North Wooters, his sons; Dennis Wooters, Jr, Charles Wooters, Matthew Wooters and Robert Wooters; and 5 grandchildren. Denny is also survived by his brothers; Butch, Kenny, Barry, his sister, Debbie, and several nieces and nephews. He is predeceased by his mother, the late Sadie Pearson Wooters, his brother Matt, and granddaughter Georlisha Charlish Wooters. A visitation will be held on Friday, April 29th at Fellows, Helfenbein & Newnam Funeral Home, Easton from 6-8pm. A funeral service will be held on Saturday, April 30th, beginning at 10am at the funeral home. Interment will take place at Woodlawn Memorial Park, Easton.

The family of Dennis "Denny" Mark Wooters, Sr. created this Life Tributes page to make it easy to share your memories.

Dennis Mark Wooters, Sr. of Preston, passed away peacefully at...

Send flowers to the Wooters, family.