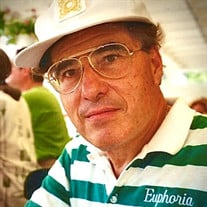 Dennis Leonard Carollo of Chester, Maryland died peacefully in his sleep on Saturday, September 18, 2021, at Arcadia Living in Denton, Maryland. He was 92 yrs old on his passing. His was a life well lived, filled with amazing memories and loving moments shared with many. Born on December 4, 1928, in Brooklyn New York, and baptized as Dionizio Leonardo, he was the son of the late Leonardo Carollo and Gertrude Concettina Paollo Carollo. As the oldest child, their family grew to include siblings Josephine Sansone (deceased), Ann (Antoinette) Carollo (deceased) and Carl Carollo (deceased). Dennis went to New York Public School 135 graduating in 1943. He went to Tilden High School in Brooklyn graduating in 1947 and then to NY School of Interior Design graduating in 1950. Dennis studied Liberal Arts at Brooklyn College until 1951 when he went into the US Army at Fort Dix NJ. He served as Quartermaster during the Korean War at Fort Bragg, North Carolina. Dennis was honorably discharged from military service, returning to New York to follow in the family tradition to become an Upholsterer. He worked with several NY furniture houses including Kaymore Furniture, Carollo Upholstery of NYC and then opening his own shop, Carollo Upholstery and Drapery in Freeport and Merrick NY. An avid hunting sportsman and boating enthusiast, Dennis loved venturing in the mountains of upstate New York or cruising the Long Island Sound and Great South Bay on his beloved boat - EUPHORIA. Early in his life he enjoyed racing bicycles with the Brooklyn Cycling Club and continued to ride his vintage Peugeot all along Long Island and the Eastern Shore of Maryland. Dennis treasured his beautiful home with his wife Barbara in Oakdale NY, where many joyous celebrations, holidays and magnificent sunsets over the Connetquot River were shared with family and friends. On moving to Kent Island in Maryland, they continued to enjoy their retirement living in paradise along the beautiful Chester River. Dennis is survived by his wife of 45 years, Barbara Carollo of Chester, MD; sons, Dennis Carollo of NY, and Michael Carollo (Elizabeth) of FL; stepdaughter, Holli Goral (Antoni) of Potomac, MD; stepson, Jeffrey Berns (Mary Ann) of Red Hook, NY; ‘Pop Pop’ to his eight grandchildren. He is dearly missed by his adoring fur-pal, Peppi. There will be a virtual celebration of life at a date to be announced soon. In lieu of flowers, contributions can be made in his name to Compass Regional Hospice in Centerville, MD https://www.compassregionalhospice.org/donate . Testimonials and remembrances can be made at www.fhnfuneralhome.com

Dennis Leonard Carollo of Chester, Maryland died peacefully in his sleep on Saturday, September 18, 2021, at Arcadia Living in Denton, Maryland. He was 92 yrs old on his passing. His was a life well lived, filled with amazing memories and loving... View Obituary & Service Information

The family of Mr. Dennis Leonard Carollo created this Life Tributes page to make it easy to share your memories.

Send flowers to the Carollo family.