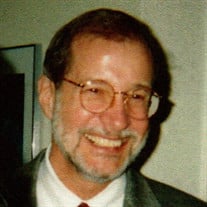 Lieutenant Colonel David B. Sussman, United States Air Force (retired), died of lymphoma at Heron Point on March 9th. He was born March 26, 1934 in Elizabeth, New Jersey to the late Esther and Rudolph Sussman. David attended Pittsburgh State College and received his commission in the U.S. Air Force in 1954. He was assigned to the Air Rescue Service as a navigator, flying SA-16s. Following a tour of duty in Libya, he returned to the U.S. and became and electronics warfare officer flying in B52s in the Strategic Air Command. He served two combat tours of duty in South East Asia, earning the Air Medal with two oak leaf clusters. After serving as the Base Civil Engineer at Carswell Air Force Base, where he developed a very early recycling program, he retired in 1973. Among his awards was the Meritorious Service Award. David joined the Environmental Protection Agency in Washington, D.C. where he managed the Waste Combustion Program. He was awarded the Bronze Medal. In 1985 he moved to Ogden Energy where he was senior Vice President for Environmental Affairs and directed the company’s Washington office. He was recognized by the American Society of Mechanical Engineers among others for his work. He retired in 2000 and moved to Chestertown. David was an avid sailor and pilot of light sport aircraft. He was also a builder and flyer of radio controller airplanes and builder of model boats. David is survived by his wife Margaret "Maggie" Smith; his sons Ron (Debra) of Pasadena, TX and Paul of Daly City, CA; his sister Judy Blume (George Cooper) of Key West, FL; and his granddaughter Skye Jenkins (Dustin) of Conroe, TX. He was preceded in death by his former wife Idell LaGrone Sussman. At his request no services will be held. Should friends desire, donations in David’s memory may be made to The American Air Museum in Britain, P.O. Box 97055, Washington, D.C. 20090-7055. Arrangements by Fellows, Helfenbein, and Newnam Funeral Home.

The family of David Baird Sussman created this Life Tributes page to make it easy to share your memories.

Send flowers to the Sussman family.