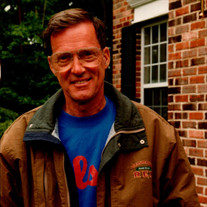 David Lester Gauntt passed away Tuesday, April 6th at the Compass Hospice in Chestertown, MD, at age 85. He had dementia and cancer. Dave is survived by his beloved wife of 35 years, Margaret M. Conlin; his children, Virginia Mandio, Linda Labinski (Rick), David Gauntt, Jr. (Elizabeth), and Matthew Gauntt (Heather); grandchildren, Tara Dickel, Matthew Mandio, Dmitri Gauntt, Peter Gauntt, and Ivan Gauntt; two great grandchildren, Gia and Cameron Dickel; and two sisters, Patricia Guy and Susan Sorensen. He is also survived by his faithful dog, Shorty, and cat, Sparkle. Dave was born in Philadelphia in 1935 and grew up in East Lansdale, PA. He graduated in 1953 from Collingswood High School (NJ). He served in the Army Reserve from 1958 to 1964 for the 357th Chemical Corp, at Ft. McClellan, Ft Dix and Camden, NJ. Dave’s first job was at R.M. Hollingshead Corp, in Camden, NJ. Dave married Virginia Petersen in 1960 and got divorced in 1979. He started working for the U.S. Navy in Warminster, PA, as a Materials Engineer Lab Technician in 1983. It was there at lunch time while playing volleyball that he met and later married Margie in 1990. Together they started Gauntt Enterprises and sold flags from all 50 states and every country in the world. He also had an interior painting and roofing partnership called D&D Painting in south NJ. Dave wrote a book about his ancestry starting with Peter Gauntt, who left England for America in 1636. It was called PETER GAUNTT AND SOME OF HIS DESCENDENTS, 1610-1680, and was first published by the Gloucester County Historical Society (NJ) in 1988, with a second printing in 1989. Dave was a husband, a father, an artist, a poet, an athlete, a genealogist, a historian and a gardener. While living in Jamison, Bucks County, PA, he founded the Warwick Township Historical Society and became its first president in 1991. As president, he and other historians led the move to restore the Moland House, a historical site in Warwick Township, inhabited by George Washington and his troops before they marched to Washington Crossing, PA and crossed the Delaware River into NJ. It was scheduled for demolition but was saved by him and other members of the Society. He also was involved in the conservation of the Eight Arch Bridge, also in Warwick Township. He was described as a huge force and the nucleus of those two efforts. He wrote articles for HISTORIA for the Northampton Township Historical Society, Bucks County, PA. Dave and Margie were editors of WITHIN WARWICK, a quarterly newsletter published by the Township of Warwick, Bucks County, PA. in the early 1990's. During his 16 years in Chestertown, Dave revitalized the Butterfly Garden at Eastern Neck Wildlife refuge on the Chesapeake Bay. He was a Maryland Master Gardener. He was a president of the Crestview Homeowners’ Association for four years. A Celebration of life will be held on Saturday, April 24 at Fellows, Helfenbein and Newnham at 130 Speer Road, Chestertown. The family will receive friends and relatives at 10 a.m. Service will start at 11 a.m. and a luncheon at 12 noon.

David Lester Gauntt passed away Tuesday, April 6th at the Compass Hospice in Chestertown, MD, at age 85. He had dementia and cancer. Dave is survived by his beloved wife of 35 years, Margaret M. Conlin; his children, Virginia Mandio, Linda... View Obituary & Service Information

The family of Mr. David Lester Gauntt created this Life Tributes page to make it easy to share your memories.

Send flowers to the Gauntt family.