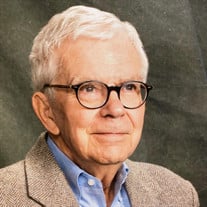 David Frank Dianich died on Monday, August 2, 2021 in Easton Memorial Hospital. His soul lifted to Heaven with the last light of the day. He was 85. He was born on June 3, 1936, in Lansing, MI, to Frank Theodore Dianich and Holly May Sleeper Dianich. David’s father was employed as an electrical engineer by General Motors and the family moved from Michigan to New Jersey and then to Newark, DE, when David was in 4th grade. When David was in 4-H, he built a livable cabin in the woods on his parents’ Christiana property. The cabin won him a 4-H state award and a trip to Chicago at 16 yrs. old. The cabin was the start of his building hobbies and later three houses. He graduated from Newark High School in 1954 and went to Michigan State University receiving a B.S. in Mechanical Engineering. He was a member of Theta Chi fraternity at MSU where he managed the house. After graduating in 1958, he entered the U.S. Air Force as a 2nd lieutenant. He served in the Air Force for 20 years at Wright-Patterson AF Base, 2 years at UCLA where he received his MBA in Operations Research, the Pentagon, 1 yr. in Vietnam (1968-69), Andrews AF Base, on the faculty at the tri-service Defense Systems Management College at Ft. Belvoir, VA, and, lastly, at Langley AF Base in Hampton, VA. While in the Air Force he received his Doctorate in Business Administration from George Washington University in 1971. He was awarded several Air Force meritorious awards and a bronze star. In 1962 before going to UCLA, David claimed he “made his best life choice” and married Jacqueline Hawkins of New Castle, DE, and off they went to L.A. in his 1958 Austin Healey, camping cross-country. That was the start of many wonderful adventures during their 59-yr. marriage. They have two daughters, Dr. Kari Dianich (Tracy Lacue), Decatur, GA, and Lauren Dianich (Jon Braithwaite), Lynchburg, VA. They have two grandsons, Gavin Dianich Braithwaite and Eric Dianich Braithwaite. David and Jackie visited many parts of the world including Rio de Janeiro, Paris, Spain, Italy, Germany, Hong Kong, China, Thailand, Australia, New Zealand, and Alaska. Many happy times were had with his daughters and grandsons camping, skiing and sailing. After retiring from the service in 1978, David taught and was chairman of the Business Dept. at Salisbury State College for three years. He then taught at the University of Baltimore as a full professor from 1981 to 1995 in the Quantitative & Information Sciences Dept. He lived part-time on our 36 ft. Watkins sailboat in the Inner Harbor of Baltimore, something he enjoyed except in the winter. When considering retiring from teaching, he approached Jackie with the idea of going long-distance sailing for 6 months. Much to his surprise, she agreed immediately. Over a 10-year period, they sailed the Intracoastal Waterway to Florida, to the Bahamas four times, Cuba twice, and as far south as Belize. They sailed together for 41 years. David loved projects and became an inventor and entrepreneur. He started a business called Bay Recreation, Inc., and sold his inventions—the successful Portable Boat Pool to protect one from sea nettles, and the equally successful Follow Me TV, later called Track it TV. He also designed a 30 ft. Ultrabrella and a portable boat cart he took to the San Blas Islands. He built two houses in historic Easton and a major part of our house in Royal Oak, MD, where they lived for 32 years before moving in 2017 to Easton’s Bayleigh Chase. David was an active member of St. Mark’s United Methodist Church for 36 years where he served on the Scholarship Committee, was a greeter and usher and advocate for name tags. David had five siblings: James E. and Nancy are deceased, as well as his parents and brother-in-law, William R. Hawkins, Jr. He is survived by A. Michael of Corbett, OR; Richard H. (Virginia) of Bethesda, MD; and Catherine Dianich Gruver (Gary) of E. Dummerston, VT. Surviving are brothers-in-law, C. Spencer Hawkins (Joan) of Earleville, MD, and Wayne C. Hawkins (Shauna) of Lewes, DE and sister-in-law Nancy Hawkins of Durham, NC. There are many nieces and nephews who he enjoyed over the years. A service will be held on Saturday, August 14, at St. Mark’s U.M. Church, 100 Peachblossom Rd., Easton, at 11 am with visitation at 10 am. Internment will be private. In lieu of flowers, contributions may be made to St. Mark’s Scholarship Com., Alzheimer’s Disease Research, Clarksburg, MD or Parkinson’s Research, Sarasota, FL

David Frank Dianich died on Monday, August 2, 2021 in Easton Memorial Hospital. His soul lifted to Heaven with the last light of the day. He was 85. He was born on June 3, 1936, in Lansing, MI, to Frank Theodore Dianich and Holly May Sleeper... View Obituary & Service Information

The family of David F. Dianich created this Life Tributes page to make it easy to share your memories.

Send flowers to the Dianich family.