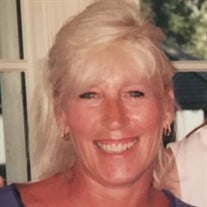 Daran Farr Ryan, 72, passed peacefully on August 2, 2021 in Easton, MD with her four children and husband of fifty-five years by her side. She was a strong woman who lived a fulfilling life as a wife, mother, grandmother, sister, and friend to all who knew her. Daran was born on March 4, 1949 in Washington, D.C. to Janet and Edward Farr. She was the oldest of four siblings. She married her high school sweetheart Daniel Kenneth Ryan Sr. on May 3, 1966. They started their journey in their hometown of Hyattsville, MD, made lifelong relationships in their Ashton home, and then lived happily ever after on the Eastern Shore. Together, they raised four children and became Hoowah and Papa D. to their two grandchildren, with a third on the way. Daran enjoyed nothing more than answering to the every whim of her children. She was a crafty and creative mom who loved to plan memorable celebrations for all the people she loved. Daran enjoyed the sun, the surf and the sand with a Kahlua in her hand. She was a genuinely selfless person whose greatest joy in life was her family. Daran is survived by her husband (Daniel Ryan Sr.); four children, Dawn Ryan (Charlie), Devin Ryan Hoover (Teddy), Daniel Ryan Jr. (Lyndsey), and Dayna Ryan; her mother (Janet “G”); two grandchildren, Paige Blanche and Wyatt Ryan; her sister, Darby, besties Buffy and T, and faithful cookie companion, King. Daran will join her father (Edward), sister (Daryl), and brother (Teddy). Family and friends are invited to attend both the visitation and funeral to honor Daran’s life. The visitation will be held on Monday, August 9th between 4-7pm. Funeral services will take place on Tuesday, August 10th at 11am. Burial will follow at Woodlawn Memorial Park, Ocean Gateway, Easton, MD.

Daran Farr Ryan, 72, passed peacefully on August 2, 2021 in Easton, MD with her four children and husband of fifty-five years by her side. She was a strong woman who lived a fulfilling life as a wife, mother, grandmother, sister, and friend... View Obituary & Service Information

The family of Daran Farr Ryan created this Life Tributes page to make it easy to share your memories.

Send flowers to the Ryan family.