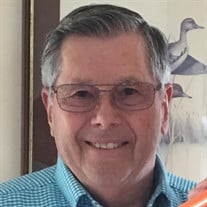 Daniel H. Solloway, Jr. of Greensboro, MD passed away suddenly at his home on February 17, 2022. He was 77 years old. Dan was born on January 14,1945; the son of Madeline Durika Dworkowski and Daniel H. Solloway, Sr. He, later in life, was blessed with his beloved stepfather, Theodore Dworkowski, who he loved dearly. He was born in Curtis Bay, Maryland, moving to Brooklyn Park, Maryland in 1956 where he lived until he was married. He was a spirited young boy, full of energy (I’m certain that his sisters would even say “onery” sometimes), yet he always had a compassionate and kind spirit. Dan was loved by all who knew him! After graduating trade school, he worked as an electrician for the Union Local 24 IBEW until he retired in 2004. He always enjoyed his job as an electrician and took great pride in his work. Dan credited his career to his father-in-law, Richard Lambert, who encouraged him to join the union when he was struggling to find a career path. He was a member of the National Guard. He was predeceased by his beloved wife, Lorretta Lambert Solloway, his birth father, Daniel Solloway, his loving parents, Madeline and Theodore Dworkowski, his inlaws, Richard and Edith Lambert, and his niece, Tia Graham, as well as grandparents, aunts and uncles. He is survived by his daughter, Dawn Fox of Greensboro, his grandsons, John Mack and Cody Mack, and a great-granddaughter, Madisyn Mack. Also, his loving sisters and brothers-in-law, Patricia and Patrick Callahan of Westminster, Dorothy and Kenneth Michlovitz of Virginia, Leila Gainer of South Carolina, and Karen Crumley of Westminster. Also, by may loving nieces and nephews. There will be a viewing on Thursday, February 24th, from 10:00 am to 11:00 am, followed by a service beginning at 11:00 am at Fellows, Helfenbein & Newnam Funeral Home: 106 Shamrock Road Chester, MD 21619. A burial will follow at St Peter’s Catholic Cemetery. In lieu of flowers, contributions can be made to the Caroline County Humane Society.

Daniel H. Solloway, Jr. of Greensboro, MD passed away suddenly at his home on February 17, 2022. He was 77 years old. Dan was born on January 14,1945; the son of Madeline Durika Dworkowski and Daniel H. Solloway, Sr. He, later in life,... View Obituary & Service Information

The family of Daniel Henry Solloway Jr created this Life Tributes page to make it easy to share your memories.

Send flowers to the Solloway family.