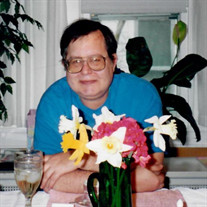 Daniel Brown Lewis passed away quietly after a brief illness on September 11, 2021, in Centreville, MD at the Corsica Hills Care Center. He was 69 years old. Danny, as he was known to his family, was also lovingly called "Uncle Danny”. Danny lived in Princeton, NJ as a young man and graduated from Princeton HS in 1969. After graduation, he returned to the family home, Blue Pigeon Farm, in Royal Oak, MD. There he enjoyed sailing with his father and his siblings aboard the Amethyst in the Chesapeake Bay, crabbing and fishing, and many of the outlets available to a young man living and growing up during the 1970's...driving endlessly in a VW van around the Shore, listening to WAYE, WYRE and WCAO, going to Buck Callahan's General Store on his father's tractor for a 10 cent Coke (much to his mother’s chagrin as the young sisters were usually aboard) and the rites of passage in Ocean City. Danny lived for over 20 years in Marling Farms, in a cottage with his companion, BEAR, a very large mixed Lab. Danny will be remembered as a man who, though he had challenges, was warm, thoughtful and shy. Never one to impose, he was always glad to be surrounded by family and friends for the many exciting family dinners and good times. Each of us will have a special place in our hearts for Danny, and will always remember his quiet manner and how he loved to reminisce about the old days growing up in Princeton and Maryland. Daniel was preceded in death by his father, William Purcell Lewis of Royal Oak, MD; his mother, Lucia Brown Dudley of Queenstown, MD; his brother, The Reverend Brewster Hastings of Abington, PA, and his brother, Clark Hastings of FL. He is survived by his sister Lucinda Usilton (Glenn) of Taveres, FL; brother Leverett Lewis (Amanda) of Sebastian, FL; sister Diana Abbott (Mark) of Dundas, MN; brother Eric Hastings (Rheanna) of Brewster, MA; sister-in-law Pamela Hastings of Abington, PA; and brother Neil Hastings (Marty) of Ocala, FL. Uncle Danny had 12 nieces and nephews (Amity, Grace, Sophia, Zander, Sarah, Christopher, Damian, Dominick, Daniel, David, Maegan & Max) and Danny's friends, Chuck L., Pat G. and Peter "Jimmy" D., all of whom are from the Eastern Shore of Maryland, will have many fond and humorous memories of Danny as they were together in many of Danny's life adventures. In lieu of flowers, donations can be made in his honor to Crossroads Community, Centreville, MD. Arrangements by Fellows, Helfenbein, and Newnam Funeral Home, www.fhnfuneralhome.com.

Daniel Brown Lewis passed away quietly after a brief illness on September 11, 2021, in Centreville, MD at the Corsica Hills Care Center. He was 69 years old. Danny, as he was known to his family, was also lovingly called "Uncle Danny&#8221;.... View Obituary & Service Information

The family of Daniel B. Lewis created this Life Tributes page to make it easy to share your memories.

Daniel Brown Lewis passed away quietly after a brief illness...

Send flowers to the Lewis family.