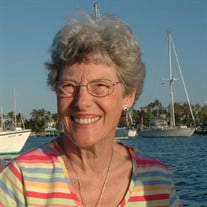 Constance T. Lindeman, 86, of St. Michaels, MD died after complications from open-heart surgery on July 7, 2021, at Sinai Hospital in Baltimore. Born in Topeka, KS she was the only child of Viola (Keifer) and Roy Trompeter. Growing up, Connie’s family moved often throughout the Midwest with her father’s job in the oil industry. They settled in Englewood, CO in 1949. Connie graduated from Englewood High School in 1953. She then graduated from Colorado A&M(now CSU) with a BS in Occupational Therapy in 1957 and married the love of her life, Neil Lindeman, two days after graduation. Connie excelled at almost everything she touched. She was an excellent student, singer, pianist, a skilled crafter, skier and competitive sailor who was loved by all who knew her. Her beautiful smile and kind, upbeat charm attracted friends wherever she went. She loved her family and was a wonderful wife, mother, daughter, sister-in-law and friend. Connie and Neil moved from Colorado to NJ in the early 1960s where they raised their children, Mark and Lisa. Moving to Rumson, NJ in 1967, Connie continued to excel running many volunteer organizations. Over her eight years there she served as President of the Junior League of Monmouth County, Forrestdale School PTA president and the first woman elected to the Rumson-Fair Haven Board of Education in 1972 earning her a place in Who’s Who in American Women 1975-1976. Having satisfied her callings as a full-time mother and ‘professional volunteer,’ Connie began her professional career as an Occupational Therapist in 1978 when Lisa left for college. Connie was the only Occupational Therapist in Talbot County for many years caring for patients throughout the Eastern Shore. She provided OT for adults and children in a variety of settings including Talbot County home health, Tidewater physical therapy, William Hill Manor, and the Benedictine school. Connie saw patients until she retired in 2015 at the age of 80. In 1980, Connie and Neil moved to Drum Point in St. Michaels, MD and fell in love with the Eastern Shore. They named their home Friendship Wharf and entertained friends and neighbors for the next 40 years, cracking crabs on the dock, watching the geese land on the cove, and enjoying evening sails together on the beautiful Chesapeake. Connie continued her life-long singing passion with The Easton Choral Arts Society. As a two-term board member her responsibilities included securing venue sites and managing the volunteers for three concerts per year. Her persistence and charm earned her “top salesperson” for program ads. Connie celebrated the love for her husband and soul-mate, Neil, every day of their 56-year marriage. Her joys also included traveling throughout the United States in their Airstream, sailing in the British Virgin Islands, on the Shrewsbury River, Barnegat Bay, Chesapeake Bay, Puget Sound and British Columbia. She is an active member of the Tred Avon Yacht Club, and a former member of the Bay Head Yacht Club and Shrewsbury Sailing Club. Connie is pre-deceased by her parents Viola and Roy, husband Neil, sister-in-law Judy Lindeman, and son-in-law Teddy Luckett. Surviving are her son, Mark Lindeman and his wife, Jaye, of Gig Harbor, WA, daughter, Lisa Luckett of Little Silver, NJ, grandchildren Jennifer Luckett of Boston, MA, William Luckett of New York, NY, Timothy Luckett of Little Silver, NJ, and sister-in-law Martha Lindeman of Seattle, WA. A memorial service will be held on Saturday July 17, 2021 at 11am at Christ Episcopal Church, St. Michaels. In lieu of flowers, donations may be made to Talbot Hospice Foundation, 586 Cynwood Drive, Easton, MD 21601, the Junior Sailing Program at the Tred Avon Yacht Club, 100 W. Strand, Oxford, MD 21654, or the Easton Choral Arts Society, PO Box 13, Easton, MD 21601.

Constance T. Lindeman, 86, of St. Michaels, MD died after complications from open-heart surgery on July 7, 2021, at Sinai Hospital in Baltimore. Born in Topeka, KS she was the only child of Viola (Keifer) and Roy Trompeter. Growing up, Connie&#8217;s... View Obituary & Service Information

A full Obituary will be posted when available.

Send flowers to the Lindeman family.