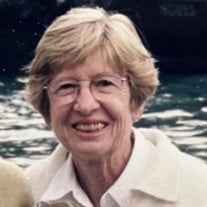 Charlotte Winner Farscht passed away peacefully on March 13, 2022 at the age of 92 after a valiant fight with cancer. She was born in Clayton, NJ on December 10, 1929, the daughter of the late and well-known James Leroy Winner and Mildred Kindle. She grew up well-pampered in Clayton with her sister, Cindy. The two were known around town as “The Winner Girls". Charlotte graduated with the class of 1947 with high honors from Clayton High School. She went on to continue her education at Albright College in Reading, PA, where she later received her Bachelor of Arts degree. She later attended C.W. Post University on Long Island to receive her Master’s degree. Before she moved to the town she loved and called home for the last 21 years, Charlotte was a long-time teacher in New Jersey and on Long Island. She was very involved in her church, Christ United Methodist, as well as various other organizations in town including the Women’s League, the Garden Club, and the Red Hat Society. Charlotte and her longtime partner, Neil Blackmore, who predeceased her by five months, were avid readers. They also enjoyed playing their piano, gardening, sailing, and traveling. She leaves behind her sister, Cynthia of PA; her daughter, also Cynthia, of NH, her daughter Katherine of VA, and her son Gordon of DE; as well as four grandchildren and three great-grandchildren. A memorial service will be held at Christ United Methodist Church on High Street on Sunday, March 27 at 12:00 pm. In lieu of flowers, the family asks that gifts be made in her memory to Compass Regional Hospice, who took incredible care of her at the end, at compassregionalhospice.org or to Kent County Humane Society at kenthumane.org. The family would also like to send out a special “thank you” to all the neighbors and friends who were so good to both Charlotte and Neil, especially as they got older. You were invaluable to them.

Charlotte Winner Farscht passed away peacefully on March 13, 2022 at the age of 92 after a valiant fight with cancer. She was born in Clayton, NJ on December 10, 1929, the daughter of the late and well-known James Leroy Winner and Mildred Kindle.... View Obituary & Service Information

The family of Charlotte Winner Farscht created this Life Tributes page to make it easy to share your memories.

Send flowers to the Farscht family.