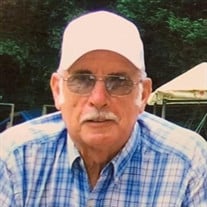 Charles Alvin Whitby, 83, of Trappe MD, died on September 21,2021 surrounded by his family of caregivers and his daughter at his side. ‘Charlie Boy’ was born on December 31, 1937, to Charles L. Whitby, Jr. and Annebel Fogwell in Trappe, MD. He learned the value of hard work at an early age having spent his childhood on various farms in Talbot County. His parents were farm caretakers, and he helped his family tend to the upkeep. He often reminisced of the family’s time at the Gross Coate farm. Charlie graduated from Easton High School, and in January 1955, at the age of 17 he enlisted in the Army. After basic training in Ft. Jackson, SC he was stationed in Germany for occupation duty with the 3rd Armored Cavalry, 7th Armored Division, 11th Air Brigade. While serving in the Army he earned the Good Conduct Medal, was awarded the Combat Infantry Badge and, as a parachutist, earned his ‘Jump Wings’. He was honorably discharged in March 1958. After his time in the Army, he held jobs at Easton Utilities, Western Publishing, Maryland State Police as a State Trooper and was a member of the Easton Fire Department. He learned carpentry and worked in Talbot County for many years as a carpenter and foreman for construction companies in Easton. Charlie enjoyed his dogs, boating, crabbing, hunting, farming, and fishing and liked to be outdoors enjoying the Eastern Shore way of life. He had a love for aviation and aviation history and never met a plane he didn’t like. He obtained his pilot’s license in 1986 and owned a Cessna that he kept at Easton Airport. He was a strong, proud, old-school man with a deep love for his family. He was proud of his Army service, although he didn’t speak of it often, but always flew the United States flag with pride. Charlie was preceded in death by his long-time partner: Vivian Morris and his sister: Clara May Seigler. He is survived by his daughter: Tracy Whitby-Fairall, of East New Market, MD; his stepson: Michael Morris, of Trappe, MD; and his sister: Mary ‘Betty’ Corder of Quitman, Texas along with nephews Jeffrey Corder, John Corder and Chuck Whitby and niece Sandra Corder and his beloved dogs Sparky and Puppy. A visitation will be held at Fellows, Helfenbein & Newnam Funeral Home P.A. in Easton, MD on Saturday, October 9, 2021, from 10:30a.m. to 12:00p.m with a service to follow at Noon. A private burial will be held at Maryland Veterans Cemetery in Hurlock, MD. In lieu of flowers we kindly ask, if you are able to, to donate funds towards the funeral service, as we hope to carry out all of Charlie’s final wishes. Donations can be sent to Fellows, Helfenbein & Newnam Funeral Home P.A. in Easton, MD

The family of Charles Alvin Whitby created this Life Tributes page to make it easy to share your memories.

Send flowers to the Whitby family.