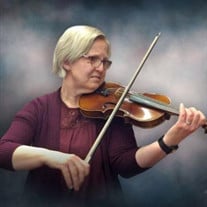 Charity M. Manspeaker, age 59, of Meade Street, Buckhannon, WV, died Friday, June 26, 2020, at St. Joseph’s Hospital. She was born on January 6, 1961, in Erie, PA, a daughter of John Edward “Jack” and Charity Margaret “Peggy” Young Dedrick, who survive in Centreville, MD. Charity grew up in Bowie, MD, and on September 3, 1983, she was united in marriage to Richard David Manspeaker, II, who survives. In addition to her parents and husband, she is also survived by her four loving children: Andrew John “Andy” Manspeaker of the home, Anthony Peter “Tony” Manspeaker and wife Kelley of Buckhannon, Matthew Augustine Manspeaker and wife Stephanie of Jessup, MD, and Mary Rose Manspeaker of Brooklyn, NY; four grandchildren: Ethan, Leigha, Molly Rose Manspeaker, and Amelia Grace Manspeaker; one brother James Dedrick and wife Kelly of Port Deposit, MD; two sisters: Colleen and husband Michael Cimba of Monroeville, PA and Kathy and husband Todd Davis of Mount Airy, MD; four sisters-in-law: Vicki Dedrick of Annapolis, MD, Carolyn and husband Garry Shoemaker of Pottstown, PA, Andrea Ernest of Fredrick, MD, and Sharon and husband Mark Prittchet of Denver, CO; one brother-in-law: Michael Manspeaker of Hagerstown, MD; father- and mother-in-law: Richard and Patricia Manspeaker of Hagerstown, MD; numerous nieces and nephews; and her three beloved cats: Lucy, Muffin, and Snoopy, and dog Bacon. She was preceded in death by one brother Joseph “Joe” Dedrick. Charity was a 1979 graduate of Bowie High School in Bowie, MD. She earned a Bachelor of Music in Music Education, Summa Cum Laude, in 1983 from West Virginia University and played in orchestras throughout West Virginia and Maryland. While in high school, she traveled with the American Youth Symphony Orchestra to Europe and played concerts in many parts of Great Britain. Charity was a parishioner of Holy Rosary Catholic Church, where she served in various music ministries. Many students received the gift of music from her during her 32-year teaching career with Upshur County WV Schools, and she loved each of them. Charity was a devoted and loving mother and wife who was very proud of all of her children. She was an extraordinarily talented violinist and guitarist and was blessed with a beautiful singing voice. Charity sang the Exsultet at the Easter Vigil for 35 years at her home parish in addition to being a cantor and a valued member of the church choir and bell choir. When she was not busy playing, teaching, or singing music, Charity was especially fond of playing with her grandchildren and caring for her cats. A memorial funeral mass will be held at 10AM on Saturday August 7, 2021 at St. Peter's Catholic Church in Queenstown, MD. Interment will follow mass in St. Peter’s Catholic Church Cemetery.

The family of Charity M. Manspeaker created this Life Tributes page to make it easy to share your memories.

Send flowers to the Manspeaker family.