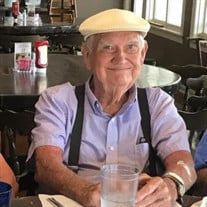 Carroll Irving Pinder, Sr. of Queenstown, MD passed away on January 3, 2022, at University of Maryland Shore Medical Center in Easton, MD. He was 97. Born on April 20, 1924, he was the son of the late John Carroll Pinder and Minnie Mae Cox Pinder. He was born in Queenstown and graduated from Centreville High School in 1942. After graduation he enlisted in the Army and served during WWII. He landed on the beach of Normandy on the 2nd day of the invasion and served under General George Patton’s third Army during the Battle of the Bulge. After returning to Queenstown from the Army he met and married Louise A. Thomas on February 21, 1948. They resided in Queenstown where he worked as a Waterman, then Greenspring Dairy and his final career was Queenstown Postmaster for the US Postal Service where he retired with more than 20 years of service. He also served as Queenstown Commissioner from 1978 -1981 and was serving during the visit of England’s Princess Anne for the bicentennial. Irving loved refinishing furniture, building homes for his family, being a grandfather, great grandfather, and great great grandfather. He is survived by his children C. Irving Pinder, Jr (Sandy) of Centreville, MD; Irene Stiller (Bob) of Queenstown, MD; Bonnie McCaslin (Charlie) of Taylors Island, MD; Terry Cox (Les) of Queenstown, MD; eight grandchildren; seven great grandchildren; and 1 great great grandchild. A visitation will be held on Tuesday, January 11, 2022, from 12 pm – 1pm at the Fellows, Helfenbein & Newnam Funeral Home, P.A. in Centreville, MD, where a service will begin at 1 pm. Burial will follow in Woodlawn Memorial Park in Easton, MD. In lieu of flowers, donations may be made to Queenstown Volunteer Fire Department, 7110 Main Street, Queenstown, Maryland 21658 Online condolences may be made at www.fhnfuneralhome.com

Carroll Irving Pinder, Sr. of Queenstown, MD passed away on January 3, 2022, at University of Maryland Shore Medical Center in Easton, MD. He was 97. Born on April 20, 1924, he was the son of the late John Carroll Pinder and Minnie Mae Cox... View Obituary & Service Information

The family of Mr. Carroll Irving Pinder Sr. created this Life Tributes page to make it easy to share your memories.

Send flowers to the Pinder family.