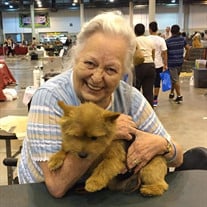 Carolyn “Carol” Eskridge Gibbs Wilson, passed away in Annapolis, Maryland on October 25, 2021 after a brief illness. She was born in San Antonio, Texas, on March 19, 1925 to Ralph Selman Gibbs and Lillian Eskridge Gibbs. She attended school in Alamo Heights and majored in drama at the University of Texas, Austin. On September 10, 1946 she married Edgar Hunter Wilson, Jr. and moved to Durham, North Carolina where he obtained his law degree from Duke University and she directed performances at the Durham Little Theater. After law school they moved to Macon, Georgia where Ed taught at Mercer University Law School. Carol served for 10 years as the director of the Junior League’s Children’s Theater, which did 20 performances a year for elementary school children. She also starred in many plays of the Macon Little Theater including I Remember Mama, The Heiress, Joan of Lorraine, Anastasia, and Candida. When Ed decided to run for the Georgia General Assembly in 1956, Carol made television speeches about her husband and his qualifications. She was quite good and he surprised many by defeating the Governor’s floor leader. Carol continued her campaign charm as Ed ran for reelection to the General Assembly and then for Mayor of Macon. As “first lady of Macon” she participated in many ceremonial duties including breaking a bottle of champagne to christen the Air Force plane “The City of Macon.” Carol was an expert seamstress, decorator, and cook. She loved to travel and took trips to Russia, China, Japan, Europe, Great Britain, and Scandinavia. In 1980, she became state president of the Georgia League of Women Voters. An article written about her at the time described her as “vocal and almost vehement” on the subject of women’s rights and the ERA. In 1991, Carol moved to Jekyll Island, Georgia and began raising and breeding Norwich Terriers. Her beloved “Joe” went to Westminster in 2002 and won best in breed. While living at Jekyll she learned to make pottery and began writing short stories. She was curious and an avid reader throughout her life. She was predeceased by her husband, Ed, in 1990. She adored and is survived by her daughter, Dottie Wilson (Bob Thompson); her grandchildren, Blake Thompson (Beth) of Oakland, California and Hunter Thompson (Adrianne) of Richmond, Virginia; and her great-grandchildren Lucy, Isaiah, Micah, Mira, Eliza and Cameron Thompson. She is also survived by her sister-in-law Beverly Wilson, and nieces Simone Scott, Michele Fletcher, Debby Hannan, Carol O’Donnell, Monique Anderson and Penny Lewis, and nephew, Ralph Gibbs. A memorial service will be held at 11 am on December 11, 2021 at Christ Church Parish Kent Island, 830 Romancoke Road, Stevensville, Maryland. Donations in her memory may be made to St. Jude’s, the League of Women Voters, or a charity of the donor’s choice.

Carolyn &#8220;Carol&#8221; Eskridge Gibbs Wilson, passed away in Annapolis, Maryland on October 25, 2021 after a brief illness. She was born in San Antonio, Texas, on March 19, 1925 to Ralph Selman Gibbs and Lillian Eskridge Gibbs. She attended... View Obituary & Service Information

The family of Carolyn Eskridge Gibbs Wilson created this Life Tributes page to make it easy to share your memories.