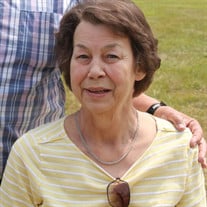 Carolyn Parsons Crouch of Rock Hall, MD passed away on September 15,2021 at Christiana Hospital. She was 72. She was born in Rock Hall on February 28, 1949 the daughter of the late George Raymond and Florence A. Thomas Parsons. Carolyn was a 1967 graduate of Rock Hall High School and attended Chesapeake College. She married Larry Crouch on September 12, 1970. She worked as a beautician under Virginia Anthony at her salon “The Beauty Lounge” in Chestertown and later with Peggy Parsons at “Peggy’s Cut & Curl” in Rock Hall. Mrs. Crouch then worked with Monumental Life Insurance Company, the Kent County Treasurer’s Office, and finished her working career with The Kent County News. She was a member of the Sgt. Preston Ashley American Legion Auxiliary. Carolyn enjoyed any weather that allowed her to wear flip flops. She also enjoyed needlepoint, baking, reading, and watching crime TV shows. She loved to laugh, either at or with her husband Larry, which he said was the key to a happy marriage. In addition to her husband of 51 years, she is survived by her brother: George R. Parsons, Jr. (Karen) of Rock Hall, MD, sisters: Kathy P. Sutton (Ken) of Rock Hall, MD, and Mary E. Simns of Rock Hall, MD, two nieces: Jessie Kerl (Josh) of Chestertown, MD and Kristen Jacquette (Chris) of Worton, MD. She is also survived by other nieces, nephews, cousins, and friends. Services will be held on Monday September 20th at 1:00 PM at Helfenbein, and Newnam Funeral Home 130 Speer Road Chestertown where relatives and friends may call two hours prior to the service (11-1pm). Interment will be in Wesley Chapel Cemetery Rock Hall. In lieu of flowers contributions may be made to Sgt. Preston Ashley American Legion Post #228 21423 East Sharp Street Rock Hall, MD 21661. www.fhnfuneralhome.com

Carolyn Parsons Crouch of Rock Hall, MD passed away on September 15,2021 at Christiana Hospital. She was 72. She was born in Rock Hall on February 28, 1949 the daughter of the late George Raymond and Florence A. Thomas Parsons. Carolyn was... View Obituary & Service Information

The family of Carolyn Parsons Crouch created this Life Tributes page to make it easy to share your memories.

Send flowers to the Crouch family.