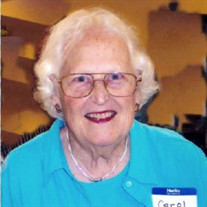 Caroline deRosset Cooke Holland (Carol) passed away on July 23, 2021 after a long illness. Carol Holland was born in San Juan, Puerto Rico on April 15, 1934 to Richard “Dick” and Caroline Cooke. She was the oldest of four children. She lived in Pelham Manor, NY; McLean, Falls Church and Richmond, VA; Atlanta, GA, and Cookeville, TN. She attended the National Cathedral School in Washington, DC. She was a member of the Junior League both in Richmond, VA and Atlanta, GA. In Richmond she attended the Richmond Professional Institute where she earned a degree in drafting. She worked at Lockheed in Atlanta on the blueprints for the 747 airplane. She met William “Denny” Holland on a double date in Atlanta. They were married on June 14, 1961 (the same day her parents were married in 1933). They had three daughters in Atlanta then moved to Cookeville, TN where she spent the next 54 years. She was a co-founder and first president of the Tennessee Tech Symphony Guild. She ran a clothing consignment store called the Clothes Tree and co-owned the Craft Corner. She was a Girl Scout leader and director of Camp Waterloo. At St. Michaels Episcopal Church she served on the Altar Guild, Flower Guild, as Church Treasurer and vestry member. The position that gave her the most pleasure was that of church secretary for 18 years. She was president of the Episcopal Church Women in the Diocese of Tennessee and on the Commission of Ministry. She attended the Diocesan Convention and the General Convention of the Episcopal Church in many states. She was a member of the Town and Gown Club and served as president for four years. She also was a member of the Garden Club, The Friends of the Cookeville Depot Museum, which she served as president, the Cookeville Art Studio and Gallery and a craft group. She loved to travel, play tennis and bridge, and garden. Her needlework and watercolors were appreciated by many. She is predeceased by her husband, Denny Holland. She adored and is survived by her children, Caroline Aland (Tim), Sally Holland, Anne Stewart (Roger) and her grandchildren Timothy, David and Mary Aland, Andrew Moser, and Sam Gray. She is also survived by her brother, Caswell Cooke (Mary), Anne Curran and Sarah Picton (Jim). Services will be announced. In lieu of flowers, donations can be made to St. Michaels Episcopal Church, 640 N. Washington Ave., Cookeville, TN 38501.

Caroline deRosset Cooke Holland (Carol) passed away on July 23, 2021 after a long illness. Carol Holland was born in San Juan, Puerto Rico on April 15, 1934 to Richard &#8220;Dick&#8221; and Caroline Cooke. She was the oldest of four children.... View Obituary & Service Information

The family of Caroline Cooke Holland created this Life Tributes page to make it easy to share your memories.

Send flowers to the Holland family.