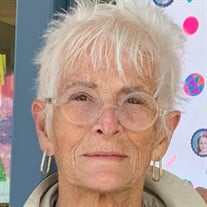 Carole L. Abruzzese (nee Leaverton) of Oxford, MD, died surrounded by family on Friday, April 23, 2021. Born October 6, 1947, in Chestertown, MD, she was the daughter of the late Oscar and Mildred Leaverton and little sister of David Leaverton. She was raised on the Eastern Shore and graduated from Chestertown High School in 1965. She attended Washington Adventist University before marrying Sidney Halsey in 1966. The couple lived in Germany for two years before moving to Northern, VA where they had two children: David Halsey and Holly Halsey. In Washington, Carole worked for the American Institute of Architects and then Columbia Hospital for Women. She married John P. Abruzzese in 1991. The following year, Carole began working at Londonderry of Tred Avon in Easton where she served as the executive director for the next 18 years. She retired in 2011. Carole then traveled the world with her beloved husband John and numerous friends. And she never truly retired. Instead, she ran and served with great pride as an Oxford Town Commissioner for 7 years. She was a leader and member of organizations too numerous to list. Even though she was a president of the Oxford Garden Club and loved gardens, she did not have a green thumb. She reveled in her children and grandchildren, hosting nanny camps in the summers, and sewing quilts and Halloween costumes. Engaging, curious, and kind, Carole had a contagious zest for life and her face always lit up when she saw you. In addition to her parents, she is predeceased by her husband John. She is survived by her beloved children Holly and David (Billie); her stepchildren Philip Abruzzese (Ann), Spencer Abruzzese and Sarah Rogan (James); her brother David (Louise); her nieces Lisa Cronshaw (Scott), Kathy Lueders (Don), and Nancy Baker (Butch); her grandchildren Henry Rogan and Kendall, Annalise, and Grady Abruzzese; and cherished family friend Kimberly Quick. Friends may call on Thursday, April 29 from 5:30 pm to 7:30 pm at Fellows, Helfenbein & Newnam Funeral Home, P.A., 200 S. Harrison St. Easton, MD. Funeral service will be held on Friday, April 30 at 11 am at the Oxford Cemetery in Oxford, MD with a reception to follow at Oxford Community Center, 200 Oxford Road, Oxford, MD. In lieu of flowers, please make contributions to Oxford Fire Co., 300 Oxford Road, Oxford, MD, 21654.

The family of Carole Lynn Abruzzese created this Life Tributes page to make it easy to share your memories.

Send flowers to the Abruzzese family.