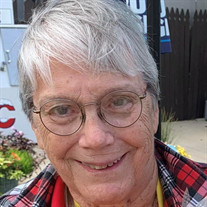 Carol Ruth Lofstedt was born in Norfolk, Virginia on August 31, 1934, and died peacefully at her home in Easton, Maryland on January 16, 2022. She was predeceased by her parents, Carl J. and Zerline R. Lofstedt, a half-brother Carl F. Lofstedt, her father’s siblings, Adeline and Gottfried Lofstedt, and her partners, Jessie Mae Pepper and Joyce A. Goodwin. Carol was raised by her Aunt and Uncle in Yonkers, New York. She received all of her education in New York (Skidmore College, BS/RN in 1956; NYU – MA in psych mental health nursing/education). After graduating from Skidmore College, Carol worked with Parkinsonian patients as a head nurse/assistant supervisor on a surgical unit. She left hospital nursing to pursue her master’s degree to help better meet the emotional needs of her patients. Following graduation from NYU in 1962, she remained at NYU to teach psychiatric mental health nursing to graduate students. She then taught associate degree students and headed the psychiatric nursing program at Bronx Community College in Bronx, New York from 1964 until her retirement in 1991. During that period, Carol was granted a sabbatical and wrote a psychiatric nursing workbook to accompany a psychiatric nursing textbook. In 2005, Carol and her partner, Joyce A. Goodwin, moved to Easton. Together they enjoyed the more relaxed pace of the Eastern Shore and pursued varied interests: reading, bird watching, gardening, movies and watercolor painting. Carol was a life member of the VFW Post 5118 Auxiliary and an active member of the Lady Patriots of the Eastern Shore. She was an active member of the Talbot County Senior Center (Brooklets Place), where she served as a member of the advisory board. She also was a member of two social groups, ASK and the Singles Club of ECE, where she made many friends who helped her adjust to living in the south. Carol was an avid animal lover and supported many anti-cruelty and animal rescue groups. While living in New York, she volunteered at a no-kill shelter. During her adult years, Carol owned and cherished numerous dogs and cats, most recently a rescue cat named Patti Cake a/k/a “The Marquessa”. Carol has no living family and wishes to thank her many friends and caregivers who helped her meet the challenges of being a senior citizen, notably Beverly Lewis, Childlean Brooks, Diana Evans, Rachel Phillips, James Malena, JoRhea Wright, Treasa Lednum, Chris and Gerry Sprole, Nancy Guiseppe, Claudia Messick, Herbert Kushner, Barbara Jo Broski, Kathy Mothershead, Amy Rust, Cathy and Peter Riolo, Jerrold Goldstein, Howard Blizzard and Alice Kaspar, to name a few. Carol will be cremated, then buried in Easley, South Carolina. Anyone wishing to make a donation in Carol’s name, may give to an educational organization or animal rescue group of their choice. God bless and be kind to one another.

Carol Ruth Lofstedt was born in Norfolk, Virginia on August 31, 1934, and died peacefully at her home in Easton, Maryland on January 16, 2022. She was predeceased by her parents, Carl J. and Zerline R. Lofstedt, a half-brother Carl F. Lofstedt,... View Obituary & Service Information

The family of Carol Ruth Lofstedt created this Life Tributes page to make it easy to share your memories.

Carol Ruth Lofstedt was born in Norfolk, Virginia on August 31,...

Send flowers to the Lofstedt family.