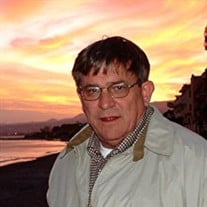 Bruce Amery Larson,74, of Easton MD, passed away Wednesday, September 22, 2021, at Talbot Hospice, Easton, MD. Bruce was born February 16, 1947, in Milwaukee, Wisconsin, to the late Harvey LaMar Larson and the late Frances Amery Larson. Bruce attended the University of Wisconsin at Madison, received a BS in Forest Management from the University of Minnesota and an MS in Natural Resources Administration from Colorado State University. Employed in the Forestry Industry throughout his career, Bruce worked for the Weyerhaeuser Company, beginning as a District Forester in the state of Arkansas and later moving to Washington and Oregon, serving as District and Chief Forester and finishing his service as Regional Sales Manager of Architectural Doors for the central Atlantic states. Bruce concluded his career as Manager of Institutional Sales – DC Area and as National Architectural Accounts and Sales Manager, Ontario, Canada for Mohawk Flush Doors, a Division of Masonite International. Bruce was a joyful, endearing, giving person. He embraced every community in which he lived. The Boy Scouts of America were near and dear to his heart throughout his life, earning the coveted rank of Eagle Scout and later becoming a Scoutmaster for his son’s scout troops. He was elected to the Klamath County School Board, Klamath Falls, Oregon, acted as a business representative for many Chambers of Commerce, and served on numerous Boards, including the Easton Club’s Board of Directors and that of the Chesapeake Curling Club. Above all, Bruce was a loving husband and father. He is survived by his wife, Nancy, with whom they celebrated their 50th wedding anniversary on June 12, 2021. Bruce was always Nancy’s steadfast “rock” throughout their years of marriage, and they both reveled in their European travels together. Bruce is also survived by his son, Eric, of Houston, Texas, and a member of the Houston Symphony. Bruce helped Eric to achieve his own rank of Eagle Scout and rejoiced in all of his musical accomplishments. In lieu of flowers, donations may be made to the Chesapeake Curling Club (www.chesapeakecurling.org) or the American Heart Association (www.heart.org). A Celebration of Life will be held on Saturday, October 16, 2021, at 11:00 am at Grace Lutheran Church, Easton, MD. Due to the recent increase in Covid cases, masks will be required to be worn in the church. A private burial will take place in Saint Croix Falls, Wisconsin.

The family of Bruce Amery Larson created this Life Tributes page to make it easy to share your memories.

Send flowers to the Larson family.