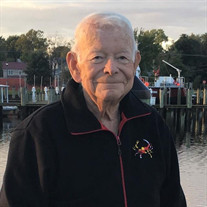 Brady Roberts, a long-time executive at Peninsula Regional Medical Center in Salisbury, and more recently a resident at Bayleigh Chase in Easton, passed away peacefully at Easton Memorial Hospital on February 2, 2022. Brady was a warm and wonderful person with a cheerful word and friendly smile for everyone. He will be deeply missed. Brady was born in 1939, in Salisbury, to Wilmer Roberts of Clara and Augusta Roberts of Bivalve. He grew up on East Church Street and attended East Salisbury School. Brady was in the first group of classes to attend the then-new campus of Wicomico High School and graduated in 1957. He was in the Wi Hi band and participated in a number of other extracurricular activities. He received a scholarship to Western Maryland College (now McDaniel College) in Westminster. At WMC he sung in the college choir and participated in several other student activities including the Army ROTC. At graduation Brady was commissioned as a second lieutenant in the Army and served two years of active duty at Fort Knox Kentucky where he was assigned to the armored training command. Afterward he spent several years in the Army Reserve. Upon completion of his active-duty service Brady returned to Salisbury where he was employed at Peninsula General Hospital (later PRMC and now TidalHealth). He spent the next 40 years at PRMC in a number of executive positions. For many years he held purchasing & supply positions, during which time he supervised the upgrading and modernization of the hospital’s procurement and internal distribution systems. Several new hospital wings were built during his tenure and he played a critical role in ordering, receiving and placing all of the new furnishings and equipment. For several years he managed the hospital’s off-campus facilities and activities. At various times in his career he also was involved in employee training and the management of PRMC’s extensive volunteer program. After retirement Brady was active in several community-service endeavors. He spent many years as a docent at the Ward Waterfowl Museum, where he was one of the longest-serving volunteers. Brady also spent several years volunteering at MAC, Inc, the Area Agency for Aging for Wicomico, Dorchester, Worcester and Somerset Counties where he counseled senior citizens on Medicare and other issues. Brady was active in several civic organizations. He served on the Boards of the local chapter of AARP and the Institute of Retired Persons; he was treasurer of both organizations for several years. He was a founder, member of the Board of Directors and Finance Chair of the Association for Lifelong Learning, an organization which during his years on the Board grew from startup status to its current role as the region’s leading provider of lifelong learning courses. He was a member of Asbury Methodist Church in Salisbury and the Elks Club. In 2018 Brady moved from Salisbury to the ACTS retirement community of Bayleigh Chase in Easton where he made a number of new friends and participated in community affairs until the Covid pandemic forced suspension of most activities. He is survived by his brother, Michael Roberts & his wife Jean of Kent Island (Stevensville); nephew Mark W. Roberts, wife Karina & stepson Diego of Kent Island; niece Lisa Roberts Smith of Centreville & her child K.A. Smith of Los Angeles; and cousin David Dayton & wife Marcia of Hebron. Cousins John Dayton (survived by his wife Cindy) and Christopher Roberts passed away in the past year. A memorial gathering will be scheduled later in the year. Donations in his memory may be made to the American Cancer Society.

Brady Roberts, a long-time executive at Peninsula Regional Medical Center in Salisbury, and more recently a resident at Bayleigh Chase in Easton, passed away peacefully at Easton Memorial Hospital on February 2, 2022. Brady was a warm and wonderful... View Obituary & Service Information

The family of Brady Wilmer Roberts created this Life Tributes page to make it easy to share your memories.